Omega (オメガ, Omega?) is an entity in the anime Final Fantasy: Unlimited. Earl Tyrant wishes to harness Omega's power to strengthen himself, so that he may rule Wonderland unchallenged.

Omega's origins are never discussed though it is suggested it may be older than even Chaos and was from another world. At one point, Omega was a full creature, his slightest movement able to destroy everything within reach. For reasons that were never revealed, Omega's body was shattered into thousands of parts, which were scattered across Wonderland.

Omega survived and its fragments strive to reunite so that Omega may be reborn. The only beings powerful enough to stand against even a shard of Omega are the Unlimited, as seen when Kuroki Kaze fights off several parts of Omega after the protagonists encounter them, with everything they do having no effect before his appearance.

When a part of Omega is active, it resembles its original structure, but when dormant they form large multi-spiked crystals which can be collected. The only exception is Clear, who takes the form of a child when active.

Clear, and later Lou Lupus, suggest that Omega may not be malevolent, but as per its nature as a being of anti-matter simply destroyed everything it came into contact with.

Omega had been shattered into thousands of fragments, though how or why is unknown. Some time after, it began to attempt to reassemble itself, and continued to this end in spite of any obstacle.

The Interdimensional Train is driven by a fragment of Omega, and was thus attacked by the other parts of the great beast in an attempt to retrieve it. Two of the three times Kaze appears to subdue the attacking Omega, allowing the protagonists to escape. The third time it attacks Kaze is not present, and the train is destroyed as Omega reunites with the fragment. Overtime, Pist gathers the rest of Omega to complete Earl Tyrant's plan. The destruction of the Ocean Puzzle scatters all parts of Omega, save for Clear, into dimensional oblivion.

Clear (クリア, Kuria?) is the embodiment of Omega's heart and emotions, and proof the fragments are not just of Omega's physical body. He appears as a bluish iridescent boy with green hair. Clear ends up in Teros where he stays until Bolbol makes him a cloak of Flying Water to cover his entire body and hold his power at bay. It is by fate that he encounters Ai after she had fallen off the submarine in the Ocean Puzzle. Clear tried to steer clear of Ai out of fear of killing her by accident, having self-loathing for destroying everything he touches.

Pist Shaz XI sends his Omega-hunting minions to track down Clear. They find him, but Clear flees with Ai. Safe in a cave, Clear introduces himself to Ai as being a part of Omega, in search of his "siblings" which are the other pieces of Omega. Kaze discovers the two and attempts to destroy Clear because of his true nature, but Ai stops him. Pist's three minions appear again and capture Ai.

Clear saves her, but his glove comes off and he unleashes his destructive power. Ai is saved by Lisa and Yu on Chobi, leaving Clear behind to be caught. Later, when Clear becomes the last piece of Omega in existence, he fuses with his Flying Water suit to create a stable crystal for Earl Tyrant to absorb.

In the series aftermath Clear's crystal is retrieved by Crux and given to Makenshi in Final Fantasy: Unlimited After, who entrusts it to Ai in the After Spiral. Clear was inserted into the Airship Sylvia to serve in the ship's Flying Water Recycling System, giving him a peaceful end to his violent story. 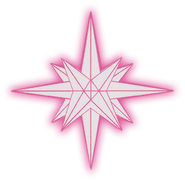