Omega (オメガ, Omega?) is a Weapon that appears in Dirge of Cerberus -Final Fantasy VII-. Unlike the other Weapons, who were created to protect the planet from a great threat, Omega serves as a last resort; when all life on the planet is threatened, Omega is born. Chaos, another being born with Omega, sends all life to the lifestream, after which Omega takes the residing and incoming lifestream into its being. When finished, it flies into space and from there, the cycle of life begins anew.

The planet, without the power of the lifestream, becomes a barren rock devoid of life. The Protomateria, which allows Omega and Chaos to be controlled, is a special materia created by the planet to prolong and delay its inevitable fate.

A group of elite soldiers called the Tsviets sought to awaken Omega under the influence of Professor Hojo (who was masquerading as its leader, Weiss the Immaculate). By gathering those with lifestream untainted by Jenova and slaughtering them, the Tsviets tricked the planet into thinking its life was threatened.

When Vincent Valentine confronted Weiss to prevent Omega's birth, he learned the latter was being controlled by Hojo, who had uploaded his mind to the Worldwide Network prior to his death. After revealing himself to Vincent, Hojo described his search for a host strong and pure enough to fuse with Omega. His first choice had been his own body infected with Jenova cells, but it had failed due to the Jenova cells corrupting his mind and soul. He had discovered Weiss, who was born from pure lifestream, which he supposedly retained even after being spliced with Genesis Rhapsodos's G cells, which hold Jenova's genes. Hojo's his plan was ruined when Nero the Sable, Weiss's brother, tainted the Tsviet leader's body with Chaos's tainted lifestream and silenced Hojo's control over Weiss's body.

Despite the efforts of Vincent and his allies, Omega was summoned. It used Weiss's body as its host despite it being infected by Chaos's tainted lifestream, but Vincent used the power of Chaos to stop it. Both Chaos and Omega returned to the planet upon the Weapon's defeat. 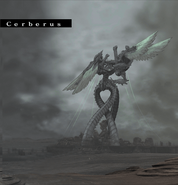 The remains of Omega in the sky. 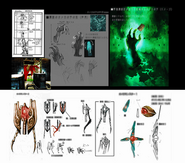 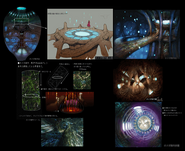