Omega is one of the two original superbosses in Final Fantasy V. It is a machine found in the Interdimensional Rift directly after a save point. Multiple Omegas can also be found in a room inside the Sealed Temple (GBA and the now defunct mobile and Steam versions only). Omega is visible on the field, so it can be avoided. To get by it, the player must move only when it is not moving, and mainly move along the edges of the ledge.

According to the thousand-year-old book in the library in the Interdimensional Rift, Omega and the dragon Shinryu were so powerful that not even the Sealed Weapons could stop them. Since its debut in Final Fantasy V, Omega has become a recurring superboss in the series as an ancient war machine implied to travel the Void, and as a nemesis to Shinryu.

The theme that plays in the battle against Omega is the regular battle theme.

Omega is one of the few enemies whose level exceeds 99. It has two special attacks: Rocket Punch and Circle (also called Encircle). Rocket Punch halves a character's HP and inflicts confuse. Rocket Punch can be used consecutively, which will negate the effects of confusion if it happens to hit the same character twice.

Circle wipes out the target for the duration of the battle. A victim of Circle cannot be revived. Omega starts the battle with Reflect set up, and this effect cannot be dispelled.

Omega's Atomic Ray and Flamethrower are fire-elemental, and thus can be absorbed with correct equipment. Omega inflicts the sap status to the party, sapping their HP, and Confusion. Omega's Earthquake attack misses on floating targets.

Even on its first move, Omega may destroy the entire party on sheer whim. It is recommended to aim for a pre-emptive strike/first move.

Each party member should equip a Flame Ring to absorb Omega's fire-based attacks. It is advised to have at least one Bard who knows Romeo's Ballad, since Omega is not immune to stop, although it is not stopped for long. In the Game Boy Advance version, Omega is also susceptible to Beastmaster's Calm.

A character who knows Thundaga Sword and Rapid Fire should be able to take Omega down in one or two turns as long as they avoid attacking while Omega is charging up, in case it counters with Encircle. Three Bards and a Mystic Knight with Thundaga Sword makes for an easy fight. With the slowest battle speed with using Romeo's Ballad every time Omega comes out of stop, it will be permanently stopped; this can be made easier with applying haste to the party.

If the party summons Carbuncle to counter Omega's Auto-Reflect and avoid Atomic Ray, they can have a Bard sing Romeo's Ballad constantly and dualcast Thundaga onto the party, and, if possible, equip Masamune to the Summoner, and Hermes Sandals on the Bard and Black Mage. With this strategy, Omega should go down in three turns.

The player should start by casting Hastega and not attack until they mix a Turtle Shell and an Antidote six times, applying the mix each time to Omega reducing Omega's Defense to where the party can really hurt it. One should never recast haste, and also not recast float unless there are no more characters with the float status left.

The party should attack with Zeninage, dealing about 9000 damage each time. The player should only hit once at a time, wait for the counterattack, heal, and then hit again with Zeninage. The final party member should repeatedly use Curaga on the party. With two Mix abilities there are three characters who can cast Arise in the party (a Phoenix Down mixed with Potion makes the Arise spell).

Fire Rings absorb Omega's fire attacks, and the float status—assuming at least one character stays alive throughout the entire fight—will ensure the party is not wiped out by Earthquake. Equipping Ribbons on as many characters as possible helps to avoid some of Omega's status ailments, but it will not protect against the confusion inflicted by Rocket Punch. To prevent it, the player must equip either the Rainbow Dress, Genji Armor, or Bone Mail. Using Dragon's Kiss (via Mix) on the party immunizes the target to Encircle.

Omega appears as an enemy. 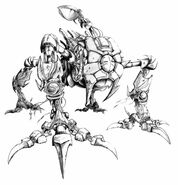 Faris erased from the battle due to Encircle (GBA).

Tomb of Memory in Sealed Temple with numerous Omegas (iOS). 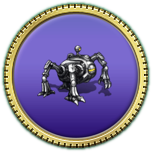