The Old Wall (第一魔法障壁, Dai ichi mahō shōheki?, lit. The original magic barrier) is a series of twelve towering statues built as a defense system strewn throughout Insomnia in the feature film Kingsglaive: Final Fantasy XV. Some of the statues also appear in the Windows and Royal Editions of Final Fantasy XV and Final Fantasy XV: Episode Ardyn.

Honoring the ancient kings of Lucis who dwell within the Ring of the Lucii, the statues animate when the Crown City is in danger at the behest of the current king, if they are strong enough, or one deemed worthy by the Ring of the Lucii. The statues wield giant versions of the royal arms from Final Fantasy XV, and once activated, act autonomously to destroy invaders.[1]

According to the Final Fantasy XV Scenario Ultimania, the statues were created 2000 years ago to serve as coffins to each hold the soul of a dead king. From these coffins, the kings await the coming of the "Chosen King." The statues were also intended to serve as the Wall that protects the kingdom of Lucis.[2] Since the "new Wall" was erected 150 years ago, smaller versions of the Old Wall statues have been mass-produced to be made into Guardians to the Wall amplifiers stationed around the Crown City. Spirits of the rulers of yore are said to reside within these figures, determined to destroy any who would wish harm upon the kingdom.

In Episode Ardyn, Ardyn Izunia seeks out King Regis to have him activate the Old Wall so he may meet his brother, the Mystic. He disables the Wall amplifiers and fights the Guardians set to defend them before facing Regis, who is shocked he knows about the Old Wall. After besting the king, the Ring of the Lucii rouses the Mystic, whom Ardyn defeats.

When King Regis meets with the Lucian ruling council to discuss Niflheim's offer of peace in Kingsglaive: Final Fantasy XV, he reveals he is too weak to control the Old Wall from his premature aging through the "new Wall" draining his life force. During the fall of Insomnia, Nyx Ulric is deemed worthy of the power within the Ring of the Lucii, and commands the Old Wall to combat Imperial General Glauca and multiple massive Diamond Weapons. Though successful in stopping the general and the Diamond Weapons, using the power of the ring costs Nyx his life as per the agreement made with the Lucii.

In the Windows and Royal Editions of Final Fantasy XV, Ardyn, through unknown means, activates three spirits of the Old Wall and uses them to halt Noctis Lucis Caelum and his retinue, using the Starscourge to force them to do his bidding. The party frees the rulers of yore from their corruption.

What happens to the Old Wall after Noctis uses the power of Providence to cleanse the world of Starscourge is unknown, but the Ring of the Lucii shatters and the Lucis Caelum bloodline comes to an end.

Three new bosses dubbed guardians of the Old Wall appear in the Windows and Royal Editions of Final Fantasy XV: The Rogue, The Fierce and The Mystic. These spirits are much smaller than the statues in the film.

More guardians appear as bosses in Final Fantasy XV: Episode Ardyn. The final boss is a full-sized Old Wall statue of the Mystic, although the developers didn't manage to replicate the size from Kingsglaive exactly due to how the boss would need to be visible to the player and there would need to be enough open space in the area for the battle to take place.[3] 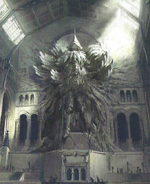 Artwork of the statue of "The Wise" king.

The Mystic who wields the Blade of the Mystic.

The Oracle who wields the Trident of the Oracle.

The Rogue who wields the Star of the Rogue.

The Fierce who wields the Mace of the Fierce.