In Archades, knowledge is power. And power has a way of opening doors, boy.

Old Archades is the slum city of rejects located parallel to the Imperial City of Archades itself, in Final Fantasy XII. Old Archades is where poverty-stricken families and people deemed unworthy to enter Archades live. "Information is Gold" on these streets. In fact, the player must exchange vital information between certain NPCs to gain access to Archades.

District on the outskirts of Archades. With the transfer of governance to the Imperial system, a new city was created, the existing city blocks now belonging to the old quarter. At the time, the under-privileged lived here along with nobles who had lost power with the rise of the Empire, while those with power lived in the new city. Now, several centuries later, little has changed. The residents of the old quarter are largely itinerants and those others outside the protection of Imperial law. Unlike the new city where buildings tower towards the sky, the old city remains brick and stone. Everything feels neglected, abandoned to fate of slow decay. With officials less than inclined to worry about the old quarter's governance, little or no effort has ever been made to revitalize the area.

In the original version, there is no treasure to be found in Old Archades.

In the Zodiac versions, twenty chests have been added to this location. Unfortunately the treasure here ranks among the worst found, signifying the poverty of Old Archades. Chests typically will only hold tiny amounts of gil or the common and nearly useless Knot of Rust. The best item to be found is an extremely rare Meteorite (D) but this appears only in a chest with a low spawn rate of 2%.

Appearing from the Sochen Cave Palace, the party arrives in the Alley of Muted Sighs in Old Archades. Walking past a stranded seeq Merchant, a group of eight dancing moogles and a number of the poor and destitute, the party reaches the stairs to the city of Archades. However, Archadian guards stop them asking for credentials or identification. Without any, the party can not enter.

Just as they are turned away, Jules, a streetear and an old friend of Balthier, appears, offering help in a sum of 1,500 gil. Vaan has no choice but to pay him, and Jules asks if he has heard any rumors in town. Vaan tells of one of three rumors he heard from walking past the Old Archades citizens, and Jules asks him to tell certain individuals what he has heard. This causes a fight forcing the guards to intervene, which allows Vaan and the rest of the party to enter Archades unnoticed.

There are three rumors which the player can tell to Jules.

At the Alley of Low Whispers, there is a group of eight moogles dancing, who are working for a Shady Seeq. Talking to the seeq reveals he is planning to sell the moogles. After telling Jules about it, Vaan can tell this to the moogles, causing the moogles to riot.

A Lucky Man has just discovered a bag of coins in a barrel and tells Vaan about it. Jules asks Vaan to convey this information to a man named Beasley, who apparently discovered his bag of coins, which he hid in a barrel, missing. This prompts a fight between the two men.

A corrupt Ex-Broker in the Alley of Low Whispers is trying to stay out of sight of his old clients, whom he cheated out of their funds. Jules tells Vaan to relay this information to a Fresh Ardent who had just returned from Archades after being swindled by a broker. Once he finds out, the newcomer attacks the older man.

The Lindwyrm is a Rank V Mark whose hunt can be undertaken after the events in Draklor Laboratory are complete. The Lindwyrm is located in the Garden of Life's Circle area of the Tchita Uplands when the weather is cloudy (no blue sky showing), but not when it is raining. If the weather is not cloudy or raining, the player must leave the Uplands completely and return to the zone. The hunt is petitioned by Fermon in Old Archades.

As part of the medallion collection sidequest for Nabreus Deadlands, the player can talk to a nu mou in Archades who says he is looking for a medallion. After talking to the nu mou the medallion can be obtained from Otto in Old Archades.

If the player forgot to take the map of Royal Palace of Rabanastre while they were there, the map is available in Old Archades' Alley of Low Whispers, for 100,000 gil.

The map is received automatically.

Save crystal in Old Archades. 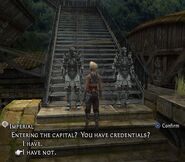