Oilboyle is a boss in Final Fantasy VIII. Two are fought in Balamb Garden - MD Level. Much later on, Oilboyles can be encountered in some parts of the final dungeon as regular encounters, although only one at a time.

This creature lives underground. Its slimy body is full of oil. Attacks by spitting oil.

Oilboyles are weak to Fire. They can draw their own magic to cure status or heal. Oil Blast is a counter attack used when one third of Oilboyle's HP is removed. Sonic Wave targets all characters and can inflict Curse. Unlike most bosses, Quistis's Degenerator Limit Break can be used successfully against them.

By junctioning Fire to elemental attack and using Fire magic, the player can quickly defeat the two Oilboyles. If the player has any Doubles, they can cast it to use two spells in one turn, to either doublecast Fire or to use both fire magic and curative magic in one go. In addition to Quistis's Degenerator, another good Limit Break is Irvine's Fire Shot. The Guardian Force Ifrit with boost can also quickly defeat them.

Oilboyle is a Level 6 Boss Card in Triple Triad used for playing the minigame and for turning into Fire Ammo with Quezacotl's Card Mod. It is a rare outcome from successfully using Card on a Cockatrice or a GIM47N. 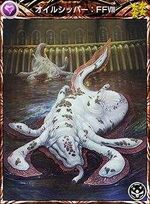