Tetsuya Nomura
Ohalland was a champion blitzball player and high summoner in Final Fantasy X. Ohalland played blitzball for the Kilika Beasts before becoming a summoner and going on his pilgrimage to vanquish Sin 230 years before Tidus's arrival in Spira. Ohalland's pilgrimage was successful, and he became the third summoner to bring the Calm. Two centuries later, Wakka would pray to a statue of Ohalland for good fortune for the Besaid Aurochs in the upcoming blitzball tournament in Luca.

Wakka's Celestial Weapon, the World Champion, was once owned by Ohalland, who left it to the ancestors of the bartender in Luca. During Yuna's pilgrimage, she hands the weapon to Wakka once the player wins five blitzball games and the party possesses the Celestial Mirror. 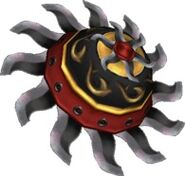