Once there was a man-eating ogre that lived in a cave near a village it constantly tormented. However, legend has it that just when the village people had given up hope, a mysterious old man wandered in and gave them an axe that instantly split the man-eating ogre in half. The ogrekiller that exists today shares the same folklore.

The Ogrekiller (オーガキラー, Ōgakirā?), also known as Ogre Killer, Ogre, or Giant's Axe, is a recurring weapon in the series. It is usually a mid to high level axe, and sometimes has an added ability of dealing extra damage against Giant-types.

An axe effective against giants.

Ogrekiller is the second strongest axe in the Dawn of Souls and 20th Anniversary versions. It can be used only by Warriors, Knights, and Ninjas. It has an Attack of 30 and deals extra damage against Giants. Two are available, both of which are found in Whisperwind Cove.

An axe effective against ogres.

Ogrekiller is a mid-level axe that can be bought at Mysidia for 15,000 gil. It has an Attack of 58, Accuracy of 50%, Evasion of 2%, and deals extra damage against Giants.

While not appearing physically or having any statistics inside the data, there is a text string of Ogrekiller suggesting that at one point during development that this weapon was planned to appear in the 3D remake as an axe.

Ogrekiller is a low-level axe that can only be used by Paladin Cecil, Kain, and Cid. It grants +80 Attack, +19 Accuracy, and deals extra damage to Giants. It can be bought in Tomra for 25,000 gil, or found in the Tower of Babil. This weapon is metallic.

In the Easy Type version, it was renamed to Oni Killer. Its attack power was increased to 96 and hit rate to 40% with a bonus to Strength by 5.

In the 3D versions, Ogrekiller has an attack power of 90 with an accuracy of 95 with the same properties as the 2D versions. +6 Strength and Stamina, -3 Speed, Intellect, and Spirit. Extra damage vs. Giants.

Ogrekiller is the second strongest axe, and provides 80 Attack as well as dealing critical damage to Giants. It is only obtained through Kain's Challenge Dungeon.

Axe effective against giants. Can be used two-handed.

The Ogre Killer (Ogre in the RPGe translation and Cleaver in the Anthology translation) is a low-ranked axe that can be equipped by Freelancers, Berserkers, and Gladiators. It has an Attack of 33. It is bought in Jachol for 3,200 gil.

Ogrekiller is the penultimate form of the Guttler, the axe Relic Weapon.

Ogrekiller is an artifact that increases Strength by 2.

Ogre has a sword icon before its name. It can be bought in Sky Town for 9,880 GP. It has 50 uses and an attack power of 8, the damage formula for Ogre is based on Strength. This weapon is effective against humanoid-type enemies.

Ogre has a axe icon before its name. It can be bought for 26000 GP in Edo and Final Town, but can also be found in Nasty Dungeon. It has 40 uses, it also increases a Robot's HP by 99 and increases their Str by 22. The damage formula for Ogre is the user's Str x13 and its effective against Spirits such as Goblins, Fiends, and Sprites.

The Ogrekiller is a level 50 weapon exclusive to Garland that increases Attack by 38, decreases Defense by 2, increases EX Force Absorption by 15%. It can be obtained by trading a Francisca, Gigas Bone x3, Strength Shard x2, and 15,460 gil.

The Ogrekiller is Garland's first exclusive weapon, now a level 30 weapon. It has 44 Attack, loses base Bravery by 84, and increases EX Force Absorption by 5%. It can be obtained at the shop by trading a Claymore, Scarletite, Stalwart's Desire x5, and 61000 gil.

Ogrekiller is an Axe obtained by finding it in Junkyard and by completing Beginner B-4 in the Colosseum. It provides 36 ATK.

The Ogre Killer appears as a 2-handed axe within the Forsaken Dungeon. It provides 97 Weapon Atk, 12 Durability, +8 Defense, -4 Speed, and -5 Consumption Rate. Only Masuda Koji can equip this weapon. 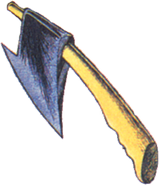 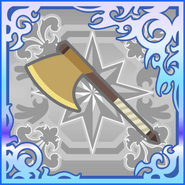 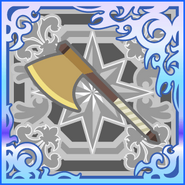