When it puts up its dukes, it will respond to physical attacks with a mighty counterattack. Fire-based attacks are the way to go.

The Ogre is a fiend in Final Fantasy X found at the Calm Lands. It is a large fire-weak fiend that counters physical attacks.

The Ogre will raise its hands after losing half its HP and stop attacking on its turn, but will counter any physical attack. It will not counter if under the Threaten effect. On its third turn with its hands raised, it will lower them, but will raise them again four turns later. Turns are not counted while the Ogre is afflicted with Provoke or Sleep.

It has three physical attacks: the first has a 50% chance to be used as a regular attack; the second has increased power and perfect accuracy, and is used for its counter; and the third is even stronger with perfect accuracy and a higher shatter rate, but can't critical. It has a 50% chance to be used and targets the party member with the lowest HP, and will be used if Provoked.

When defeated, the Ogre can drop armor with SOS Haste and/or HP +10%. It can also drop weapons with Counterattack and/or Magic/Strength +5%.

They are weak to Fire. 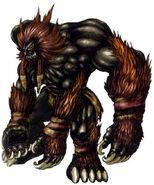 Ogre in battle.
Add a photo to this gallery

Retrieved from "https://finalfantasy.fandom.com/wiki/Ogre_(Final_Fantasy_X)?oldid=3380986"
Community content is available under CC-BY-SA unless otherwise noted.