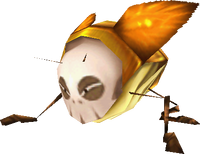 The oglop (ブリ虫, Burimushi?) is an insect in the world of Gaia in Final Fantasy IX. They are generally considered pests and can appear in large gatherings.

Oglops are yellow beetles with large eyes. Uncommon to insects, they have eyes akin to mammals' with eye lids and pupils and have four legs rather than six. A regular oglop is large enough to fit onto a person's palm. They feed on vegetables, and thus are seen as something of an agricultural pest, and make a distinctive "gwok gwok" sound.[note 1]

Many find oglops repulsive, one of the things which Princess Garnet has to learn when she tries to conceal herself as a commoner while in the village of Dali. Oglops are known to live in Dali's farmland, the Gargan Roo caverns, as well as on the Conde Petie Mountain Path, but given how familiar everyone seems to be with them, they are likely a common insect, at least on the Mist and Outer Continents. As oglops are found in the Mist-filled Gargan Roo cavern, they at least tolerate the noxious substance, and no monster oglops are seen though Mist is known for its mutating and enraging effect on living beings.

Oglop oil is a popular medicine on the market. A female Red Mage, visiting the city for the Festival of the Hunt, considered buying some as a souvenir, but then deems it too disgusting. In Conde Petie, seasoned oglop is considered a delicacy, at least by the dwarf Bryan Rootrunner, who laments oglops only being found on the mountain path. If Eiko tries to cook one, however, her guests are repulsed.

The Tantalus Theater Troupe uses oglops to distract Steiner and the crowd by letting a bag of them loose in the M.S. Prima Vista's engine room while they are kidnapping Princess Garnet. Blank has the oglops concealed within his suit of armor, but during the battle with Steiner his armor is blown off, and the oglops begin jumping everywhere sending Steiner screaming and running around in a panic.

In Dali, Princess Garnet goes by an alias and tries to blend in with the peasantry. She visits the farm and picks up an oglop, surprised to find oglops eat vegetables. The old lady tending to the farm notes girls are usually disgusted by oglops, and Garnet over-exaggeratedly screams and throws the oglop away.

The Regent of Lindblum, Cid Fabool IX, was turned into an oglop by his wife Hilda as an act of revenge for his infidelity. Despite retaining some human characteristics, Cid cannot keep working on his airship projects, blaming the loss of creative drive to his transformation. Zidane tries to help Cid return to his human form by procuring three specific potions, but this only turns Cid into a frog. Later on, in a bid to save Eiko from Kuja in Mount Gulug, the party rescues Hilda who turns Cid back into a human.

During Eiko's cooking sequence in Madain Sari, the player has the option to add an oglop in the stew. If they do, however, the dinner will be spoiled as Eiko's dinner guests are disgusted at the discovery of having eaten an oglop. The oglop for the stew must be caught from Conde Petie Mountain Path, where oglops congregate but are a bit tricky to catch.

Oglops are alluded to in World of Final Fantasy in an advertisement for "Oglopicide" in Cornelia.

Blank releases oglops onto the hold of M.S. Prima Vista.