Cid Pollendina: Oh, shut up and help me remodel the Ogir-Yensa Sandsea page!
Please expand this article into a full one. The following tasks need to be completed:

This is Urutan-Yensa territory... and they are unfond of visitors.

The Ogir-Yensa Sandsea is a location in the land of Ivalice in Final Fantasy XII. It is a desert to the far west, where the sand flows like water.

The Urutan-Yensa are the only humanoids who live in the Sandsea. A peculiar race, not much is known about them due to their hatred of outsiders. They have a hard exoskeleton, and walk very quickly. They have a queen, implying they are comparable to an insect-like society.

Built by the Rozarrian Empire, the giant oil rigs around the sandsea were built to drill oil from the sea. Because of interference by the Urutan-Yensa, Rozarria abandoned them and travelers use them as walkways to cross the desert.

A desert region in the west of the Jagd Yensa, most of it covered in fine-grain sand that ebbs and flows like water, compared from antiquity to a sea. Abandoned drilling rigs can be found here and there, dotted about the ever-shifting terrain. In the past, the Rozzarian Empire sought to draw rich oils from the ground here, but relentless attacks from the Urutan-Yensa, who consider the Sandsea to be solely theirs, drove them away. Men are now a rare sight inside the desert borders.

After Princess Ashe has been rescued from onboard the Dreadnought Leviathan, she decides to pursue the throne of Dalmasca. To prove her lineage as royalty, she needs to obtain the Dawn Shard in the Tomb of Raithwall.

The party accompanies Ashe on her quest through the Sandseas. They must cross the sandsea on foot as it is located on a Jagd and thus Balthier's airship does not fly there. They are joined by Vossler, a member of the Resistance, who has been looking out for Ashe since she was announced having committed suicide two years previously. During the party's journey through the Sandseas they are pursued by Urutan-Yensa, eager to defend their land from the humes.

Because the Sandsea is of sand terrain, all Earth attacks are 20% more powerful than normal.

In the Zodiac versions, the treasures are different. The Infuse technick and the Reflect and Sleep spells can be found here. The Golden Amulet can be found in Platform 1 - Refinery, a good accessory that doubles the wearer's LP yield.

To find the Bull Chocobo the player must have spoken to the "Huntmaster" in Phon Coast and defeated Thalassinon, which will trigger the start of the Rare Game quest. The Bull Chocobo then has a 40% chance of appearing in the South Tank Approach. With the exit and enter approach, it will spawn eventually.

Pineapple has a 20% chance of appearing in the Platform 1 - Refinery area. There are numerous spawn points where it may appear, and where in the area it appears is random, meaning the player has to search the entire area to see if it has spawned.

The Urutan Exile has a low chance to drop the Osafune, a powerful weapon when the player first crosses the Sandsea, so chaining the Urutan-Yensa to increase the chances of acquiring the katana is still highly advised.

Dyce appears near the Gate Crystal. He then moves to the Nam-Yensa Sandsea and the Tomb of Raithwall. Later on, he relocates to the Balfonheim Port where he will remain for the rest of the game.

The map can be found in Platform 1 - Refinery. In the Zodiac versions, the map is moved to Platform 1 - East Tanks. 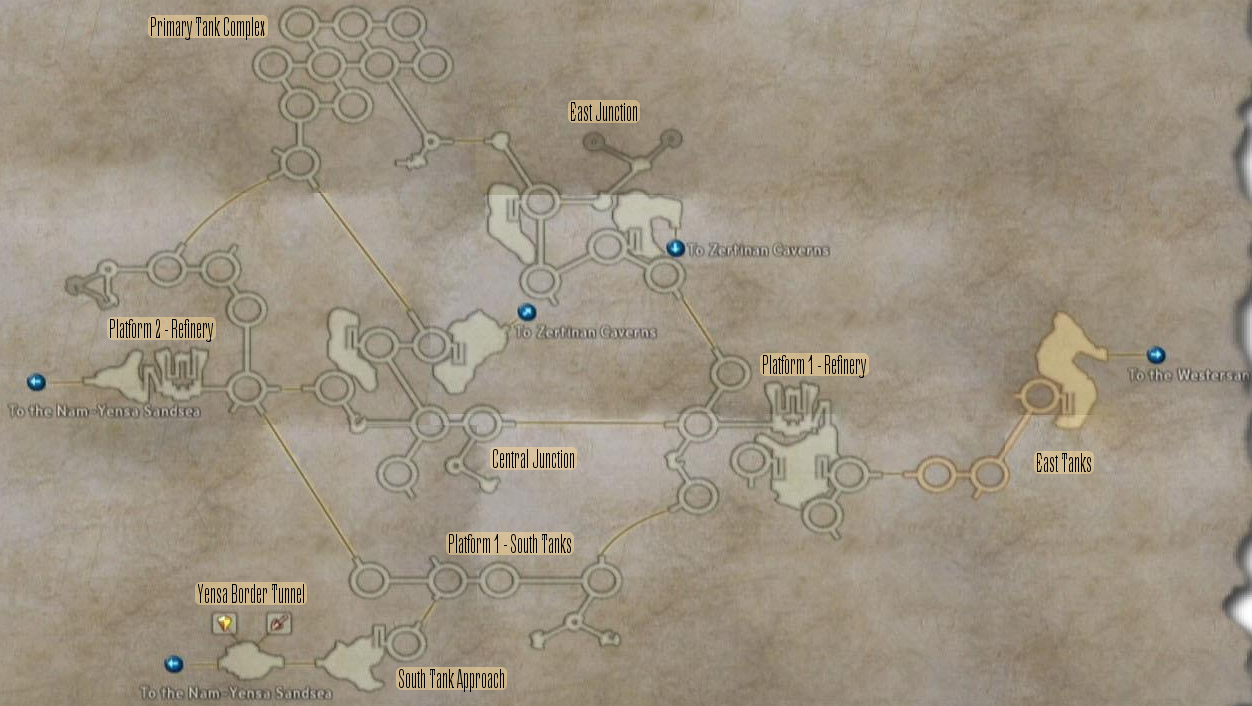 Map of the original Final Fantasy XII that includes all treasure information. 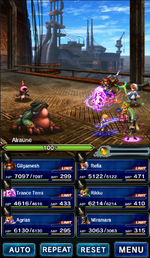 Party on an oil rig.