Mysterious island revealed by the skysea's destruction. The aegyl dare not approach for fear they should disturb the Lord of the Seas said to dwell thereon.

Oghu, the Veiled Isle is a location on the Muruc Cahuac Skysea from Lemurés in Final Fantasy XII: Revenant Wings. It becomes accessible after the skysea is destroyed and becomes an archipelago. Though Oghu does not host any storyline missions, a few Rank III Espers appear here.

Leviathan, lord of the deep, dwells on this small island adrift in the remains of the skysea. His home destroyed, Leviathan's cry echoes in the void, but is it a cry of anger or lament?

This is a battle against the Esper Leviathan. 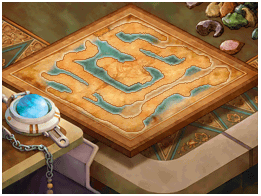 A column of water rises where once stood the majestic skysea, radiating thick clouds that cast a pall over the surrounding landscape. Is this a scion's attempt to shroud the world in darkness?

This is a battle against the Esper Famfrit.

This section about a location is empty or needs to be expanded. You can help the Final Fantasy Wiki by expanding it.
Final Fantasy XII: Revenant Wings setting
Community content is available under CC-BY-SA unless otherwise noted.
Advertisement