This settlement is located in the remote north of Gran Pulse. Crystal sand blanketed the village after the War of Transgression, leaving the surrounding lands barren and lifeless. Oerba is the homeland of Fang and Vanille, two of the main characters from FFXIII.

Villagers from several different clans had settled in Oerba and all lived together in communities, sharing their houses with the fal'Cie Anima as the village protector. After the War of Transgression, Oerba was abandoned, left devoid of life other than Cie'th and other monsters. Daisuke Watanabe, the lead scenario writer for Final Fantasy XIII and Final Fantasy XIII-2, has explained in an interview[1] that when the war ended the environment on Pulse was in ruins and human survivors had no alternative but to leave, and this is how Oerba became a ghost town. The village's outskirts are covered in a layer of snow-like crystal dust. Although it is not explained how the crystal dust came to be, it could be a result of Oerba's proximity to Cocoon.

Fang and Vanille's former home, the village of Oerba is located at the northernmost edge of the Gran Pulse mainland. Villagers from several clans shared a communal lifestyle here, honoring the fal'Cie Anima as their patron and protector.

Today, what remains of the abandoned village is overrun by Cie'th and in the process of being swallowed by an encroaching sea of ashen crystal sand dunes.

Oerba is an abandoned village located in the northern reaches of Pulse. The sand that covers the ground is powdered crystal that fell during the War of Transgression.

In recent times, large numbers of Cie'th have been seen in the area. Presumably, they were created from living humans to serve some mysterious fal'Cie purpose. Cie'th are former l'Cie who failed to complete their Focus.

Oerba is a designated Special Protected Zone, so visitors are not allowed. However, you might get permission from the Academy for an airship flyover.

Oerba—the place it all began. The place where the Pulse fal'Cie lay dreaming. Vanille and Fang's home. Just maybe... it will be the place where we find the answers we're looking for.

After completing the trials of Taejin's Tower, Oerba is only a short distance away. While Vanille and Fang recall their hometown covered in flowers, they come to accept it is now a barren land devoid of color. The party is free to explore the village, which includes finding spare parts to repair Bhakti, Vanille's pet robot, but when they reach the end of the Rust-eaten Bridge they encounter Galenth Dysley in the form of Serah reciting the hymn of Ragnarok.

After failing to trick the party with the imitation Serah, Dysley informs the l'Cie he has had the resurrected Cid Raines succeed him as Primarch and engineered a back-up plan to destroy Cocoon if the l'Cie refuse to follow their Focus. Following a battle with Dysley in his true form as Barthandelus, he invites the party to "release Cocoon from her suffering" and departs, leaving them an airship transformed from Menrva.

Before their departure, Vanille activates a purple Cie'th Stone and reads the story of the War of Transgression, which reveals the events behind her and Fang's participation in the war, the goddess Etro's intervention, and how Barthandelus brought them and Anima within the Pulse Vestige into Cocoon to finish what they had started. With their knowledge of Dysley's plan to make Cocoon tear itself apart, the l'Cie fly Menrva out of Oerba and through a gate into Eden.

The Academy made Oerba a protected area in memory of Vanille and Fang's sacrifice. Centuries later, Oerba is caught within a paradox due to its past and future overlapping causing Temporal Rifts to emerge.

After departing from the Yaschas Massif 10 AF, Noel Kreiss, Serah Farron, and Mog arrive at Oerba 200 AF to find the village caught in a paradox and being sucked into a black hole. As they resolve the anomalies, Oerba recovers.

Caius and his companion, seeress Yeul, corner Noel and Serah on the roof of the old schoolhouse saying they have been watching them. Caius tells Serah and Noel he knows of their travels through time because of Yeul's visions. He engages them in battle seeking to sanction them but before he can kill Noel, Yeul intervenes, saying time has already been changed, and she and Caius leave the area.

As Serah, Mog, and Noel explore the Temporal Rifts throughout Oerba at 300 and 400 AF, Mog begins to remember things from his past before he met Lightning in Valhalla and recalls a place called the Ocean of Time. Serah and Noel believe that to be Mog's home and offer to help him return there. Completing the last Rift in 400 AF, the trio hears a bunch of moogles on the other side. Mog remembers how he was sucked into a paradox and drifted through the Void Beyond to Valhalla, losing his memories along the way. In the end, Mog decides to stay with Serah.

A view of Oerba's bridge is seen as an apocalyptic vista in the trial known as the Altar of Judgment in the Luxerion Cathedral.

Oerba represents a concept of the "present" world, contrasting Cocoon's futuristic look. There is evidence of living spaces, wind farms, oil rigs, billboards, and a railroad, possibly connecting Oerba to the outside world. A potential reason for the difference between Cocoon's futuristic look, and Oerba's present day look, is due to Oerba being destroyed over 600 years ago, and so technological advancements in the following years on Cocoon progressed to the more futuristic style, whereas Oerba stayed in ruins and Cie'th and monsters slowly overtook it.

After the Day of Ragnarok when the timeline has been distorted, Oerba is caught in a paradox: the great tree that was in the west side of the village is gone allowing passage, but some doors are locked and can't be opened. Seemingly, most of the Ashensand that was leading to Taejin's Tower is gone, yet the area is extended by waters lowering near the Deserted Schoolhouse, as well as access to the Rust-eaten Bridge being cut off. A plaza behind Fang and Vanille's home is uncovered and free to travel. 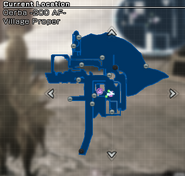 Oerba's sole survivor is Bhakti, Vanille's pet robot. The player can help fix him by salvaging parts scattered throughout the village. In return, Bhakti will grant valuable items, such as Deceptisol, Platinum Ingots, and Gold Nuggets, as well as tips on where to find secret Cie'th Stone missions and new areas that the player may not be aware exist.

Oerba has numerous Temporal Rift puzzles the player must solve.

This section about a quest in Final Fantasy XIII-2 is empty or needs to be expanded. You can help the Final Fantasy Wiki by expanding it.

"Dust to Dust" plays at the outskirts of Oerba and in the village itself. Like many other tracks, it features female vocals, evoking a sense of nostalgia and longing for times past, and represents the reaction of Fang and Vanille upon returning to their hometown, now a ghost town.

Oerba appears as the Field Music Sequence for "Dust to Dust."

A photo of Fang and Vanille can be seen on a table in the house with Bhakti. The player can also find Vanille's and Fang's items here, such as Vanille's bracelets and necklaces. Among the many things to examine in Oerba is a model globe of Cocoon found in the school that has been defaced with "derogatory writing."

Oerba stays abandoned in Final Fantasy XIII-2. The reason for this is that the game designers felt that Oerba holds a symbolic value in Final Fantasy XIII as it signifies the end of the protagonists' journey. Therefore, the developers would have felt uncomfortable in repopulating Oerba or making it busy.[1] A reflection of an uncrystallized Cocoon can still be seen in the waters near the Deserted Schoolhouse instead of the present state of Cocoon in Oerba -200 AF-, possibly a paradox. Throughout the different time periods in Final Fantasy XIII-2 more and more robotic pets appear in the village proper. This is possibly a paradox due to the many temporal rifts in the village.

Concept art of Oerba with the Pulse Vestige before the war. 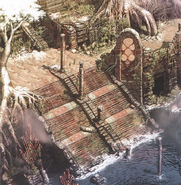 Artwork of the ruins of Oerba.

Artwork of Vanille and Fang's home. 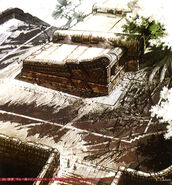 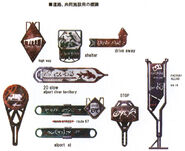 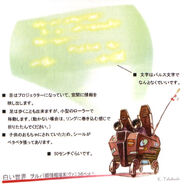 The mountainous outskirts of Oerba.

Outside Oerba, Cocoon in background.

Vanille in Oerba with Cocoon behind her in the sky.

Vanille reads the runes at Oerba.