Cid Pollendina: Oh, shut up and help me remodel the Oeilvert page!
Please expand this article into a full one. The following tasks need to be completed:

You see, there's an anti-magic barrier around the place. And I want to send you because you're too stupid to use magic.

Oeilvert is a location in Final Fantasy IX. Standing on the Forgotten Continent, it is an ancient structure that holds Terran technology and history and information about the alien planet. Kuja sends Zidane to Oeilvert to get the Gulug Stone in his stead, as he is reluctant to carry out the feat himself due to the anti-magic barrier. Oeilvert becomes inaccessible in endgame.

As an anti-magic field prevents visitors from casting magic inside the structure (the following commands are sealed: Wht Mag, Blk Mag, Summon, Sword Magic, and Blue Magic), a good party choice for Oeilvert aside of mandatory Zidane is to take Steiner, Freya, and Amarant whose skillsets aren't considered magical. The player may opt to bring Quina as there is a Qu's Marsh to the north of the Hilda Garde I. The party in the Desert Palace will be made of the characters who aren't chosen for Oeilvert.

Final results...are still pending... In order that our glorious history not die with us, we were constructed...

Oeilvert is one of the locations that originally existed on Terra that ended up on Gaia 5,000 years ago due to Garland's failed attempt to merge the two planets into one.

When Zidane and his party enter Oeilvert, they find it was built by the Terrans and holds devices that record Terran history. The holographs strewn across the ruins depict a Terran civilization that was advanced and inquisitive about its world, yet ultimately dying. This plight is partially explained in an antechamber by multiple stone faces. Another room depicts the construction and testing of warships; this produced the Invincible. The Star Display area where a moogle is located, has a lowered platform with the Terran crest embossed on the floor. This area may be an eidolon extraction circle based on its similarity to other areas the party has visited.

Despite all the information left behind by the Terrans, the player party is unable to draw any basal conclusions from the multiple holographs, and so head to the ruin's core to fetch the Gulug Stone. A levitating construct, Ark, protects the stone. Once the Ark is defeated, Zidane collects it.

After the party returns from Terra, Oeilvert becomes inaccessible due to the Iifa root blocking the entrance.

The letter the party delivers from Mimoza at the Oeilvert entrance to Mooel inside the room of stairs in the archive:

Hi-Potion, Emerald and Elixir can be purchased from Stiltzkin for 888 Gil.

The music that plays in Oeilvert is called "Oeilvert"; it is an arrangement of "The Place I'll Return to Someday". "Chamber of a Thousand Faces" plays in the archive.

Oeilvert may be a reference to the Zodiac Brave Story Sound Novel of the same name, a minigame from the Japanese version of Final Fantasy Tactics.

One can obtain a set of Gaia Gear inside this structure that is not Gaian in origin. The Japanese name for the equipment uses a word referring to the earth, ground, or land, which has been localized as "Gaia" in all prior appearances of the equipment.

Concept art of the facility from outside. 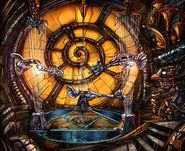 Concept art of the facility from the inside. 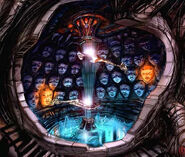 Concept art of the narration room.

Oeilvert on the world map. 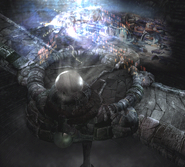 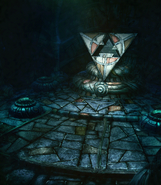 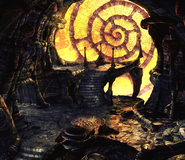 A battle background in Oeilvert.

Another battle background in Oeilvert.

Another battle background in Oeilvert.

Another battle background in Oeilvert, when fighting Ark.

The abstract naming of Oeilvert makes sense in light of many Terran structures incorporating eyes into their designs, or in this case, name.