Cid Pollendina: Oh, shut up and help me remodel the Odin (World of Final Fantasy) page!
Please expand this article into a full one. The following tasks need to be completed:This request can be discussed on the associated discussion page. Remove this notice upon completion.

One of the Pleiad's seven. Hates thunderstorms. His "Zantetsuken" literally means "sword that sunders iron"...but it pretty much sunders everything.

Odin is a character in World of Final Fantasy. He is one of a group of powerful Mirages, known as the Pleiad's Seven.

:Notes: One of the Pleiad / Zantetsuken / Rides Sleipnir / Wanders in search of worthy swordsmen

A Series Regular
Odin is another classic character who has turned up in virtually every FINAL FANTASY with a summoning system. His trademark Zantetsuken can slice through anything, and he always appears with his beloved horse, Sleipnir. A mounted swordsman who can demolish any enemy with a single blow—awesome, right? No wonder he's popular. And he gets the celebrity treatment, too, playing a vital story role in more than one title.

Battle Addict
Odin is always on the lookout for powerful warriors to test his blade on. His obsession is definitely not normal. Let's be honest here: the guy's a battle junkie. But he does have his standards; if you want to challenge him, get a sword or get out. You can see now why he was so put out to be forced to fight Lann and Reynn.

During his service to the Demon Dyad, he reputedly wandered the land, calling out, "Any swordsmen around here? Anyone? Swordsmen?" (That may or may not be a direct quote.) And a hundred years of slumber didn't do much to change his hobbies. Until he ran into Lightning, not a single fighter he found could last more than a second against him. No wonder people called him a butcher.

Although sword quality was a big factor, even the incredibly talented Lightning barely survived her encounter with Odin. To her credit (and perhaps due to her soul's vast experience), Lightning sought outside help with her strategy. If Cloud had been the one fighting Odin, he would have just charged the guy, screaming.

As invincible as Odin may seem, the guy's got one serious Achilles' heel. Thunder and lightning have always been his downfall, and as Reynn pointed out, Ramuh is the only one of the Pleiad that Odin has never been able to stand up to.

Why does Odin fear lightning so much? Maybe one day, when he's transfigged, we'll learn the whole story. 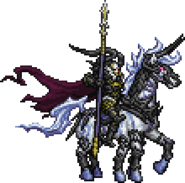 Ultimate+ & Ultimate++ Odin
Add a photo to this gallery 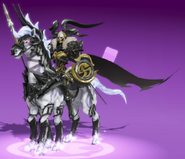