Tyrannical lord of the Yarhi who cleaves his opponents in two.

Odin is a Rank III Non-elemental Melee Esper in Final Fantasy XII: Revenant Wings. He is available in the Ring of Pacts after completing Mission 24: The Dance. His stats are not to be confused with those of Velis. His attack, Zantetsuken, does damage and knocks back surrounding enemies. 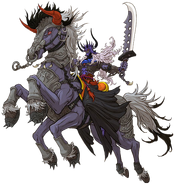