Lightning when she summons Odin

Odin is Lightning's Eidolon in Final Fantasy XIII and its sequels, acting as her summon ability in the first game. He is a lightning-elemental mechanical warrior who can transform into a horse for Lightning to ride. 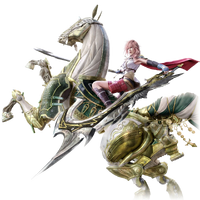 Odin is a tall, mechanical warrior who carries a sword, Zantetsuken, and a shield, which appears to be the head of a horse. In Gestalt mode, Odin transforms into the horse Sleipnir, named after Odin's horse in Norse mythology. The Zantetsuken is a pair of large curved swords that each form a hook shape. The Zantetsuken can be wielded as either two individual swords (as Lightning wields them) or a single double-bladed sword (as Odin wields it).

The numerous pieces of writing all over Odin's body are written in Etro script, the language of the goddess associated with Eidolons. The Latin writing on the symbol that emerges from the ground when Lightning summons Odin reads:

By grace of Etro, let thunder herald your arrival. Come forth, sunderer of falsehood.
A name in blood, a pact of truth. Odin shall rise his bond eternal and unyielding.

The plate on Odin's back (as a horse) reads:

My weapon is light, my steed is thunder. I am the herald of truth. I am Odin.

The inside of the Zantetsuken blades' hook shape bears writing that reads "Odin."

Eidolons are entities who reside in Valhalla, the middle world between the mortal realm and the unseen realm of the dead. They answer to Goddess Etro, the deity that rules over Valhalla, and she sends them out to help l'Cie who struggle with their Focus.

When the recently-branded Pulse l'Cie Lightning and Hope traverse the Vile Peaks, the former's patience wears thin as Hope becomes a liability. She threatens to leave him and her frustration summons the Eidolon Odin who proceeds to attack Hope. Lightning saves him and they defeat the Eidolon together, convincing her to let Hope travel with her and help him become stronger. Lightning's eidolith manifests and from then on, she can conjure it from her brand and shatter it to call forth Odin to aid her in battle.

Lightning summons Odin when the party returns to Cocoon from their exploration of Gran Pulse. They crash a grand prix event in Eden and ride through the racetrack with their Eidolons in Gestalt Mode, Lightning riding Odin in his steed form, facing an Anavatapta Warmech. After Cocoon falls from the sky and is crystallized, Lightning is freed from the fate of a l'Cie and presumably can no longer call forth Odin, who remains in Valhalla.

Soon after Lightning was dragged into Valhalla by chaos, prior to becoming Etro's champion, she encountered Odin and defeated him to renew their partnership while forging a new one with Bahamut. As told in Final Fantasy XIII-2 Fragments After, when the moogle Mog ended up in Valhalla, he battled Odin and the knight Valfodr upon learning the realm's rule is that the weak serve the strong. Neither wanted anything to do with the moogle due to his weakness, and Mog was found by Lightning who took him under her wing. Odin accompanied Lightning and Mog to the Temple of the Goddess, but stayed outside with Mog as they were denied entry.

With an army of Eidolons at her service, Lightning commands them to battle Caius Ballad's army of Rift Beasts. She rides Odin to engage Caius, four other Odins charging alongside her, and their battle takes them across Valhalla. She summons Bahamut to save a falling Noel Kreiss, before sending him away to New Bodhum -003 AF- to find her sister, Serah Farron. Odin stays by Lightning's side till the end, and she sends the steed to aid Noel and Serah once the two find their way to Valhalla to defeat Caius once and for all. Noel and Serah's journey leads them to solve the paradoxes in the timeline Caius Ballad had set up to bring about the end of the world, and during their visit to Vile Peaks they fight a paradox that is a shade of Odin, and even manage to recruit it to their roster of allies.

Lightning's Story: Requiem of the GoddessEdit

The eternal battle between Lightning and Odin against Caius and his Chaos Bahamut form rages on, until Caius strikes Lightning down as she is caught off guard, and she is taken away by chaos. She finds Serah's soul restrained by the spirits of Paddra Nsu-Yeul who manifest Caius whom Lightning battles. After dispatching her opponent, Lightning mounts Odin and encounters Shadow Yeul, demanding her to let Serah go, only for Lightning and Odin both to be swallowed by chaos. After Serah's soul tells Lightning not give up hope, Lightning decides to preserve the world's existence in Etro's place as her true atonement and enters crystal stasis, waiting for the day she will awaken at the end of eternity. As the realms merge due to chaos being unleashed after Etro's death, the Eidolons no longer have a place where to reside, and no goddess to command them.

After Caius's scheme to kill Etro succeeded, Lightning awakens from crystal stasis in Nova Chrysalia 500 years later, and finds herself unable to summon Odin. Odin endures in the form of a white chocobo known as the Angel of Valhalla, whose appearance is said to herald the end of the world. Lightning nurses the Angel of Valhalla to health after saving the injured bird from a Chocobo Eater and learns of Odin's condition from Yeul. Caius retains the ability to summon Chaos Bahamut, though he does not perform an incarnate summoning.

The Eidolons aid their former allies in the final assault on the god Bhunivelze, and after the end of time and the beginning of a new, god-free universe, the Eidolons disappear to reincarnate, bidding farewell to their former masters.

Lightning and Hope face Odin as a boss in the Scavenger's Trail at the Vile Peaks. Odin yields to those who amass chain bonuses and to those who heal the wounded. Therefore, the Medic role is the key to winning the battle. Odin's primary target is Hope, attacking with physical attacks and Thundara. Lightning will need to do both healing and chain building, as Odin's strikes necessitate healing greater than Hope alone can supply. Odin often guards with Ullr's Shield, allowing for either a break to heal or an uninterrupted attacking phase.

In Final Fantasy XIII-2, a corrupted variation of Odin, named Twilight Odin, appears in the Vile Peaks in the years 10 and 200 AF as a physical manifestation of chaos, using the memories of Lightning's summoning in the area years ago as a source of energy. He is fought as a boss in both areas and can be recruited as a Paradigm Pack monster for the party.

Odin has 5 ATB bars in Final Fantasy XIII. The Eidolon's rank is the sum of Lightning's current Crystarium level and the number of roles Lightning has advanced to level 5.

Odin attacks the enemy Lightning is targeting with Flourish of Steel, Skyward Swing, and Seismic Strike. He will stock four attacks from the aforementioned abilities on his ATB bar and then have Thundaga as the final attack. If the enemy is far away he will use Crushing Blow. When Odin uses Thundaga it takes only one ATB slot, compared to when player characters use it (where it takes three ATB slots). Odin works as a Sentinel in battle drawing in all enemy attacks with its Valhalla's Call.

Lightning can perform Zantetsuken while riding Odin as the Gestalt Mode's finishing move. The attack's strength has different levels. It has a chance to instantly kill the opponent, no enemy is immune to the attack. Whether Zantetsuken kills the enemy is determined by Odin's physical attack power and the current chain bonus.

Zantetsuken raises the stagger gauge by a various amount based on level prior to dealing damage:

If the enemy has less HP than the solution, it dies. If the instant kill fails, it deals fairly low damage instead.

Lightning's battle with Odin is accompanied by "Desperate Struggle" (死闘, Shitō?, lit. Battle to the Death).

Final Fantasy XIII Ultimania Omega reveals some ideas the designers had behind the Eidolons. It had been decided that Odin was going to be a horse in the planning stage, and in his normal mode he was made to look like the Joker from a deck of cards. Odin was originally more harsh looking and dark colored, but the developers wanted Lightning to be a knight with a white horse. Since Lightning had lost her parents at a young age, and tried to take their place and raise Serah, Odin was imagined as someone she would project a fatherly image onto.[2] Snow's Shiva Sisters represent the Farron sisters, Lightning and Serah.[3]

In the Lightning Returns: Final Fantasy XIII Ultimania, Director Motomu Toriyama refers to Odin as a "good friend" to Lightning, stating that his inclusion in the game was as someone Lightning could open her heart to.[4]

Odin appeared in the Lightning Strikes collaboration event. He is summoned by Lightning at the start of On Wings of Chaos, the final FATE of the event. Odin fights against the Heart of Chaos along with the player character and the non-playable battle ally Lightning, but he is untargetable and cannot take damage.

Lightning's EX Burst is Gestalt Drive, but she does not ride Odin, although she uses the same attacks when summoning Odin in Gestalt Mode: Lightning Strike, Thunderfall, Stormblade, Razor Gale and Zantetsuken. She also has a weapon called Odin Blade.

Odin appears as an enemy. His abilities, however, may be imparted to the delegation's units as Soul Break skills.

T-shirts with Eidolon designs have been on sale in the Japanese Square Enix store. The shirts cost ¥3,900, with two versions, Odin or Shiva. The Eidolons have also been made into action figures in the Final Fantasy Creatures Kai Vol. 3 series. These figures cost ¥6,240 a piece. Final Fantasy XIII -Play Arts Kai- figure of Odin was released in July 2010; it has two forms, Sleipnir or Odin.

[view · edit · purge]In Germanic mythology, Odin (from Old Norse Óðinn) is a widely revered god. In Norse mythology, from which stems most of our information about the god, Odin is associated with healing, death, royalty, the gallows, knowledge, battle, sorcery, poetry, frenzy, and the runic alphabet, and is the husband of the goddess Frigg. In Norse mythology, Valhalla was a majestic hall in Asgard, where the gods and half of those who died in combat dwell. It was ruled by Odin. In the Lightning Saga, Valhalla is the middle realm between life and death ruled by Goddess Etro, but Odin resides in this realm. Various Lightning Returns: Final Fantasy XIII aspects are also based on Norse mythology.

Pink flower petals are part of Odin's summon animations, and Lightning's finishing blow in Gestalt Mode, Zantetsuken. As falling cherry blossoms are associated with mortality, the pink rose petals take the form of similar imagery, as Zantetsuken has a chance of inflicting instant death.