I am Odin... To him who doth vanquish me, I grant my august powers.

Odin is an optional non-controllable Guardian Force in Final Fantasy VIII. He appears randomly at the start of battles to instantly kill the enemies.

Odin is a warrior who rides a six-legged pale gray horse with pupilless white eyes and brown mane and tail. His appearance is heralded by thunder. Odin wears dark form-fitting armor with large horns and gold details. His face is bronze-colored and he wields a long blade known as the Zantetsuken, which translates to "steel-cutting sword". With it, Odin is able to cleave through almost anything in one hit. He is one of the Guardian Forces who speaks to the party.

Odin is acquired from the Centra Ruins, an optional dungeon on the Centra continent the player can reach once they gain access to free-roaming sea travel. Once the ruins are entered, a 20-minute timer will appear, counting down until the player defeats Odin. The player must solve a few puzzles within the time limit, obtain a code and open the door to where Odin awaits. After the player opens the door, the player may leave Centra Ruins and return to get more time to defeat Odin.

The party must find a series of red gemstones and place them in the eyes of statues to acquire the code to access the room where Odin is fought. If they cannot do this before the timer expires, they must start over. The quest is easier with the Enc-None ability equipped (learned by Diablos).

Proceeding up into the ruins, there are two gargoyles; one at the entrance leading to Odin, and one on top of the ruins. The entrance to Odin is locked and a five-digit code must be entered. The player must climb above to the second gargoyle and retrieve the code and two gems to be placed on the first gargoyle. The player then enters the code once the gems have been placed on the first gargoyle, and the entrance is opened.

If the timer runs out before the party encounters Odin, it simply vanishes, and the player can no longer encounter Odin without exiting and returning to the Centra Ruins.

Odin does not attack during the battle, but when the time runs out, he will unleash Zantetsuken, resulting in an instant Game Over. When Odin is defeated, the player will obtain his Triple Triad card, and Odin will randomly appear at the beginning of a random encounter.

Call upon me in times of trouble...

Odin when he joins

Odin's appearance is random, but he will never appear against bosses (the one exception is explained below), Tonberries or Cactuars. Odin can appear against Propagators.

When he appears, the summon animation plays automatically and Odin will cleave the enemies in two with his sword, instantly winning the battle for the party. The chance of Odin being summoned is a flat 12.9%, or a 33/256 chance. There are long-standing rumors that this can be boosted by such things as higher average Luck, by having Dead Spirits in the inventory (Odin's card modifies into 100) and by having a high Crisis Level. These have been disproven by looking into the game code, as well as by empirical testing.

If acquired before reaching the top of Lunatic Pandora in the story, Odin will appear in a battle with Seifer. Seifer counters the Zantetsuken and destroys Odin. The Zantetsuken is knocked from Odin's hand, and a mysterious hand reaches out of a dimensional portal to catch it. This is revealed to be Gilgamesh, who replaces Odin for the remainder of the game.

It is possible to still acquire Odin after the time compression has occurred, in which case the player can keep him till the end of the game.

The time limit for 20:00 minutes starts once the player enters Centra Ruins. When the timer reaches 0:00 while in the battle against Odin, he will launch Zantetsuken, sending the player to the Game Over screen. Odin will not attack before the time limit expires, which makes him an optional Draw target. Odin has the rare spell Triple that is an especially potent junctioning spell, but the party must have a high Magic stat to be able to successfully draw it. Odin can also be mugged for a Luck-J Scroll.

Odin is a Level 9 GF Card in Triple Triad used for playing the minigame and for turning into 100 Dead Spirits with Quezacotl's Card Mod. The card drops from his boss form.

Odin from Final Fantasy VIII appears as a boss. 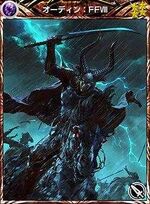 The action figure for Odin shows that his horse Sleipnir used to have eight legs, but two of them are but bloody stumps.

Artwork by by Tetsuya Nomura.