Causes KO to all enemies.

Odin is an eidolon in Final Fantasy IX who can be acquired as a summon for Dagger. He also appears in a story scene. Odin is a demonic-looking knight riding on a six-legged horse as per his Norse mythology origins. He attempts to dispatch foes in one strike with his sword that can cleave anything. Odin a recurring summon in the Final Fantasy series.

Odin was an eidolon that manifested to protect the crystal of Gaia. The practice of summoning him presumably went back centuries, as he appeared on a mural on the Eidolon Wall in Madain Sari, the summoners' village on the Outer Continent. As the summoners left the Mist Continent 500 years ago, summon magic fell into legend among the Mist Continent populace.

After the king passed, Queen Brahne became power-hungry. Kuja came to Alexandria and stoked her greed, knowing that Garnet had escaped Madain's Sari's destruction and now lived in Alexandria Castle. When Garnet would turn 16, they would be able to extract the eidolons from inside of her into gemstones and summon them to subjugate the other Mist Continent nations to steal their crystal shards, combining them into a whole that could summon the ultimate eidolon: Alexander. Garnet felt something was wrong and absconded the castle, unwittingly taking Alexandria's crystal shard with her, and taking on the alias "Dagger". When she returned to confront her mother about attacking other nations with a new army of black mages, Kuja put her to sleep with a spell and the court mages Zorn and Thorn extracted Garnet's eidolons.

Odin was transferred into an orb of dark matter, which Queen Brahne used to obliterate Cleyra, the settlement reduced to a crater on the ground. The queen was at awe at the eidolon's power. Garnet's new friends rescued her from the queen's clutches, and she came to learn about the eidolons and her true heritage. She was able to regain her eidolons one by one from various gemstones, finding an orb of dark matter for sale in an auction house in Treno, which let her learn how to summon Odin.

Odin is a demonic figure with two long horns and red glowing eyes. He wears golden armor and a long dark green cape with a tattered hem, which billows behind him as he rides on a white armored six-legged horse with a darker mane and tail and similarly red eyes to its rider. Odin carries a large sword in his right hand with a fan-shaped tip. When called to battle, Odin appears with the blue moon of Gaia behind him.

Odin costs 112 MP to summon before Garnet/Dagger loses her eidolons, and 28 MP after re-learned from a piece of Dark Matter for 30 AP. One Dark Matter can be obtained from the Treno Auction House, after the party has returned from the Outer Continent. If used in battle with the Item command, it will inflict 9,999 damage to a single target. If the player used the Dark Matter in battle, they can try win another one at the auction, but the player can only hold one at a time. Two more Dark Matters can be obtained from the superboss, Ozma. One can be stolen, while the other is a random drop.

Odin's attack, Zantetsuken, deals Instant Death that either kills an enemy or misses; the chance of success is greater the more Ores the player has in the inventory. If Dagger equips the Odin's Sword ability, Odin will deal non-elemental damage to all surviving enemies as well. The attack does more damage the fewer Ores the player has in the inventory. When randomly summoned in Trance, he does non-elemental damage, whether or not Odin's Sword is equipped. With Odin's Sword, Odin is usually slightly stronger than even Ark (although damage decreases as one obtains more Ore) and costs less to summon. In the full summoning animation, Odin uses his sword to deliver the attack, but in the shorter one, the spear Gungnir simply drops from the sky (even if the attack is still called Zantetsuken). When he was summoned by Queen Brahne, Gungnir was used to destroy Cleyra.

Dagger learns Odin's Sword from Ancient Aroma for 50 AP, found in Ipsen's Castle, in the room that has a giant version of Odin's sword on the wall. The player must solve the puzzle of the rotating tablet near the elevator to the mirror room. When prompted, Zidane is required to examine, push, pound, think, push, think, try something drastic, and rest to flip the wall and gain access to a new area. This opens up a door in the dungeon's entry foyer, directly to the left of the first door the party entered. The new passage leads to a large glowing sword with three ledges and two pots. A voice within the room whispers, Fight the flow of time, meaning the pots must be picked up and placed on the next ledge counterclockwise from their present location. After both pots are rotated thrice, the electricity within the blade will fill one pot, from which the Ancient Aroma may be collected.

The attacks and spell power for Dagger's summons are based on item stock and length of animation, the short version usually being weaker, but it does not affect Odin's Instant Death chance. When Dagger summons during her Trance, there is a random chance the summon will reappear during the battle for zero MP cost, but the animation will always be the short version. The summon will reappear in intervals to repeatedly damage the enemy until a new eidolon is summoned or until Dagger exits Trance, is KO'd, or ejected.

The formula used to determine the amount of damage an eidolon does during its full animation is as follows:

Because Odin kills its targets outright, he is an especially useful eidolons against Yan, a tough enemy to defeat without instant death techniques. Odin's damage capabilities are also great under Odin's Sword, especially if the player only has few Ores, but then his Instant Death chance will be fairly low. Summoning Odin earns the The Dim Mak achievement in the mobile and Steam versions.

Odin has an eidolon-type card for Tetra Master, which can be obtained late into the game. In the endgame, many good cards rarely appear in opponents' decks in Black Mage Village, and Lani can be played in Madain Sari if the player is not using Dagger or Amarant in their party. The earliest the card can be found is when Zorn and Thorn take the party to the Forgotten Continent from a mountain crack if the player has progressed the Chocobo Hot and Cold quest to the point Dead Peppers are available. 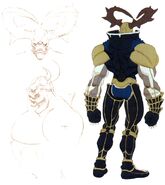 Odin's attack is called Zantetsuken. [view · edit · purge]Zantetsuken (斬鉄剣?) is Japanese for "iron-cutting/slashing iron sword". It normally refers to a blade formed out of exotic materials rumored to be able to cut through steel and/or iron. The term was often associated with blades created by the feudal swordsmith known as Kobayashi Yasuhiro.