Octopus Ink (タコじるしのすみ, Takojirushi no Sumi?, lit. Octopusmark Ink), also known as OctopusInk, is a recurring ability in the series. It is the trademark ability of Ultros, which acts nearly identically to the ability Ink, inflicting Blind to the entire opposition's party.

Octopus Ink is an enemy ability used by Ultros during the final battle on the Blackjack when traveling to the Floating Continent for the first time. It inflicts minor non-elemental damage and Blind to one party member.

Octopus Ink is Ultros's Feral Link, which deals magic damage on one target and nearby foes as well as inflicts Slow and Curse to the whole party. Its input type is "complex": its first stage consists of tapping the

button and in the second, final stage tilting the left analogue stick right, down, and left (→↓←).

Octopus Ink is the summon ability of Ultros, which prevents the opponent from seeing either player's Bravery for 75 seconds.

Octopus Ink is the summon ability of Ultros, acting the same as before.

Octopus Ink is an enemy ability used by Ultros when fighting on the Airship. It inflicts non-elemental physical damage and Blind to one target. 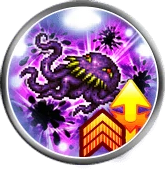 [view · edit · purge]Cephalopod ink is a dark pigment released into water by most species of cephalopod, usually as an escape mechanism. All cephalopods, with the exception of the Nautilidae and the Cirrina (deep-sea octopuses), are able to release ink.