Octo-Kraken is a boss from Ceodore and Kain's Tale in Final Fantasy IV: The After Years. It is accompanied by four of its tentacles, the Octoleech.

It is a good idea to come with full HP and with the best equipment at the moment. The player should focus all their attacks on the tentacles first and later the Octo-Kraken. The Band ability, Cross Slash, lowers the boss's HP quickly. A Spider's Silk can be used to cast Slow on him and Protect to improve the party's Defense. A Ice Shield and a Flame Mail helps to absorb the elemental damage from the tentacles' attacks.

A simple strategy is to use a Silver Hourglass, which will cast Stop on every enemy other than the Octo-Kraken itself. This leaves the boss vulnerable to all attacks, which ensures a quick victory. 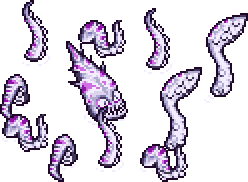 Octokraken (iOS).
Add a photo to this gallery

Retrieved from "https://finalfantasy.fandom.com/wiki/Octokraken_(The_After_Years)?oldid=3239843"
Community content is available under CC-BY-SA unless otherwise noted.