Traitor... you will pay!

Octaslash (八刀一閃, Hattōissen?, lit. Eight Sword Brandish) is one of Sephiroth's trademark attacks. It consists of a swift sequence of sword slashes, though despite the name it is not always comprised of eight hits.

Octaslash is a Digital Mind Wave usable by Zack when Sephiroth's portrait lines up. It is known at the start of the game and consists of eight sword attacks against a single target, the power of each sword slash depending on the level as follows:

The Octaslash Independent Materia boosts the chance of Sephiroth appearing on DMW when equipped. It begins at 5x, and increases by 1x each level up to 9x. It is a level 8 materia bought from Research Dept. QMC+.

A different version of the skill is used as an enemy ability. Octaslash is used by Sephiroth when fought as a boss in the Mt. Nibel reactor.

The animation is different from the DMW attack: Sephiroth charges Zack, uses the Masamune to fling him into the air, then leaps up, attacks several times and dives back down to the ground to strike again, Zack falling to the ground after he lands. It hits five times, four of which Zack blocks, and the damage is dealt as a lump sum.

Sephiroth uses Octaslash during the final boss fight. It is his most powerful sword move in the third phase. He uses it if not staggered in time before shifting into another elemental infusion, performing seven wide swings before impaling his sword on the party.

Octaslash is one of Sephiroth's HP attacks. Sephiroth charges forward while swinging five times, turning in the air to track opponents. He is able to use it on the ground initially and learns to use it in the air at level 13. It costs 40 CP to equip and 300 AP to master. Though the animation depicts Sephiroth slashing five times, the attack does indeed hit eight times as per its name, dealing seven hits of Bravery damage before inflicting HP damage as the eighth hit.

Octaslash is one of Sephiroth's HP attacks, learned at level 10. Sephiroth strikes eight times, teleporting above his opponent right before administering the final blow.

Octaslash appears as a strength ability. In order to obtain Octaslash, the player must perform transmutation on the Oblivion ability. In addition, Sephiroth also uses Octaslash when summoned into battle.

Octaslash is Sephiroth's Up Special move, a charged version of his Blade Dash attack. Sephiroth performs eight powerful slashes in a straight line in the direction the player aims. It is more powerful than Blade Dash and travels faster and slightly further, but cannot be used to grab ledges on the way and has a large amount of recovery frames, leaving him wide open if he misses.

In the revised battle between Cloud and Sephiroth in Advent Children Complete, Sephiroth uses an attack similar to Octaslash at the climax of the fight. Sephiroth reveals his lone wing and flings Cloud into the air. He flies after him, stabbing him eight times before throwing him back to the ground. The way Sephiroth uses this attack, is strikingly similar to when he used it against Zack in Crisis Core. 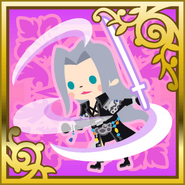 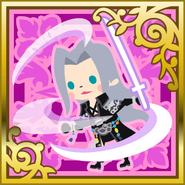 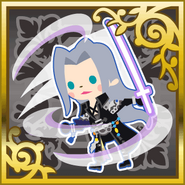 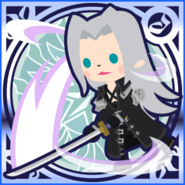 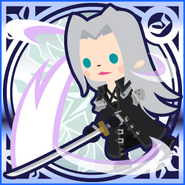 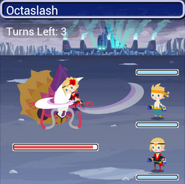 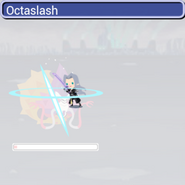 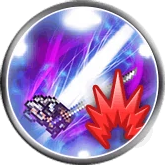 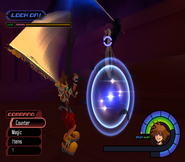 The "oct-" or "octa-" prefix comes from Ancient Greek ὀκτά- ("eight"). The name Octaslash refers to the attack striking eight times, and may have been chosen to sound similar to Cloud Strife's signature attack, Omnislash.

In Japanese, (hattō, 八刀?) means "eight swords" while (issen, 一閃?) means "flash" or "brandish" and refers to the brandishing of a glinting sword.