Ochu is an enemy in Final Fantasy XIII and mark of Cie'th Stone Mission 39. It appears in three places: a regular enemy in Aggra's Pasture in the Archylte Steppe guarding a treasure orb after triggering a cutscene with the Microchus nearby, and twice in the Faultwarrens as a mission mark and a regular enemy. In all three instances, Microchus accompany it.
See also: Ochu

Scattered starlight reveals a ghostly truth that no unknowing eye might see.

The illusions we name boundaries are but challenges to overcome. Overcome the challenge of the ochu, and a lasting truth shall be divulged.

Ochu is immune to preemptive strikes, rendering Deceptisol useless. Its basic physical attack deals moderate Earth-elemental damage and knocks its target into the air. Screech deals high damage to the party over a large radius and can remove status enhancements, while buffing Microchus with Bravery. Seed Dispersal summons additional Microchus, and is used after a portion of the Ochu's HP is removed. Pollen fully heals nearby Microchus and removes status ailments, while damaging the party, removing status enhancements, and inflicting Poison and Slow.

Ochu may cause some problems for those unadvanced in the Crystarium. One strategy is to start the battle with COM/RAV/SYN or COM/MED/SYN and let the Synergist cast at least Haste and Enfire on everyone. The party can then switch to COM/RAV/RAV or COM/MED/RAV.

The Commando should attack the Ochu and when it uses Screech, the party should switch to MED/SEN/MED, and let the Sentinel take the hits while the Medics heal. The party can then switch to COM/RAV/RAV or COM/MED/RAV. When Ochu is defeated, the Microchus should be easy to handle. 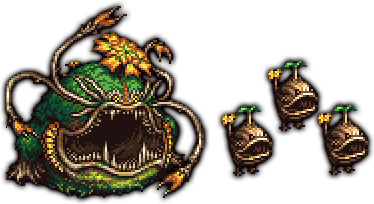 The Blooming Chichu is based on the enemy seen in Final Fantasy XIII. It appears in the dungeon Sohm Al (Hard), included in patch 3.5 The Far Edge of Fate.