The Ochu is an enemy from Final Fantasy X-2.

"A swift plant fiend with feet. Its tentacles can both poison and confuse its enemies, so things can quickly get out of hand."

None
Nothing to learn

"A plant fiend. Oversouling has given it the ability to use magic. Its favorite new trick is to cast Haste on itself and launch a frenzied attack."

It is the simplest of the Ochus to defeat, and is not a big threat. Using Fire-elemental attacks such as Fire or Flametongue will help end the fight quickly. Carry several Antidotes to counteract any Poison it may inflict on party members.

One notable Ochu was created from the spirit of a dancer girl in Tobli's service who made enemies by showing off her beauty and died as a result. Instead of leaving for the Farplane, having learned that only the most beautiful live among them, Ochu attempts to become a moonlily along the Moonflow. However, Ochu learns the Moonlilies refuse to give her entry into their waters as they reveal her soul was ugly for the deeds she committed. For ten days, Ochu regretted her past actions until she turned into a large flower along the bank. 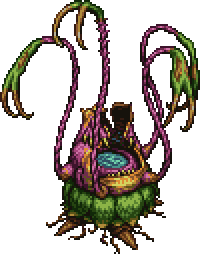 Retrieved from "https://finalfantasy.fandom.com/wiki/Ochu_(Final_Fantasy_X-2)?oldid=3239278"
Community content is available under CC-BY-SA unless otherwise noted.