Ochu is an enemy in Final Fantasy VIII fought in forests near Timber and on the Island Closest to Heaven. It looks like a large version of Grat. Like the other plant enemies, it also uses status ailment attacks.
See also: Ochu

Likes to live in the forests. Attacks with its tentacles and also uses status-changing attacks.

Ochu's moves include Drink Magic, which is a counter to a magic attack, where Ochu will remove one unit of a random magic spell from a party member. Guardian Forces count as a magic attack. Ochu Dance will cause Slow and Curse to exposed party members. Its earthquake attack hits all party members for earth-damage unless they are floating.

To avoid the penalty from using magic against it, the player can instead junction the elements it is weak to in Elem-Atk-J and attack physically: ice and fire.

Ochu is a Level 3 Monster Card in Triple Triad used for playing the minigame and for turning into Ochu Tentacle with Quezacotl's Card Mod. 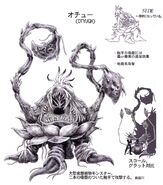