Cid Pollendina: Oh, shut up and help me remodel the Ochu page!
Please expand this article into a full one. The following tasks need to be completed:This request can be discussed on the associated discussion page. Remove this notice upon completion.

The Ochu (オチュー, Ochū?, lit. Otyugh) is a recurring enemy in the Final Fantasy series. Its appearance is usually that of a large plant with either two or four thorny arms and a ring of flower petals that somewhat resemble a skirt. It commonly uses Sleep and Poison-based attacks.

Ochus (Ocho on the NES) are a common sight when riding the canoe to Mount Gulg, and also make appearances in the Citadel of Trials. Neochus live in the Flying Fortress.

The Ho-chu is an exclusive enemy to the Battle Square. However, there exists coding in the game for an enemy formation consisting of one Ho-chu in the Ancient Forest. It seems to have been originally planned as a special encounter, since it is not possible to escape from it.

Ochus are scattered in various places around the world, including the forest in which the second Laguna sequence takes place and the Island Closest to Heaven.

The Conde Petie Mountain Path has Ochu enemies on it.

This section about an enemy in Final Fantasy IX is empty or needs to be expanded. You can help the Final Fantasy Wiki by expanding it.

Lord Ochu is an optional boss which can be fought in the Kilika Woods. Later on Ochus are encountered along the Moonflow road. Lastly, Mandragoras are encountered in the Mt. Gagazet caves and on the road leading to Zanarkand.

Ochus become regular enemies after Chapter 4 and Drowsy Ochu's overtake the Mushroom Rock Road during Chapter 3 and all Ochu's can later be fought in Via Infinito in Chapter 5. The enemies of this genus are Drowsy Ochu, Flailing Ochu and the regular Ochu. It takes 12 kills to Oversoul an Ochu-type fiend.

Ochu is fought as a boss on the 20th floor.

There is a creature known as an Ochu; however, this creature is actually in the Morbol family, more commonly called Malboros. They inhabit certain plateaus of Rolanberry Fields.

The Rafflesia inhabiting the areas around Windurst during the Shadowreign era more closely resemble the traditional Ochu. 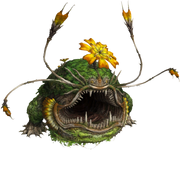 Ochu appears as a sidequest boss in Archylte Steppe -Year Unknown-. It appears with several Microchus. It can be fought repeatedly by returning to the Steppe and resetting the weather.

The Ochu is a common menace throughout the Black Shroud. The proper Ochu are the strongest variant, seen within sylph territory. Weaker varieties include the Microchu and Overgrown Ivy. All varieties enjoy spraying toxic fumes that can inflict status ailments such as poison or slow on players.

The Ochu is a member of the Malboro species.

The Ochu and Neochu appears as Malboro type enemies, they are more powerful than average Malboros and are only fought once as part of a special mission. According to the mission description, they are not native to Ivalice.

Main article: Ochu (My Life as a King)

Ochu from Final Fantasy XIII appears as an enemy.

The gaping maw and lethal tentacles almost ruin the beautiful flower atop its head.

The Ochu appears as an enemy encountered on the Archylte Steppe. It uses Feeler and drops the Dragon Whisker.