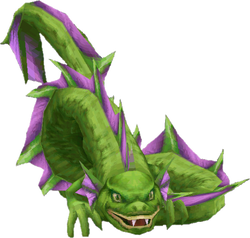 Oceanus (オケアノス, Okeanosu?), also known as Oceanos, Latimeria, and Latimeri, is a recurring enemy in the series. It first appeared in Final Fantasy III.

Oceanus is an enemy fought at Forbidden Land Eureka, fighting only with regular physical attacks. It is moderately powerful and thus is no threat to the party.

Oceanus is an enemy fought in forests near South Figaro in the World of Ruin. It attacks by using Magnitude 8 as well as regular physical attacks and Corkscrew.

Oceanus is a sea serpent enemy found in the Syrcus Tower, as a reference to the Final Fantasy III version of the enemy. Similarly named creatures called Okeanis, more akin to aquatic ogres, live in the Dravanian Hinterlands, whose meat and eggs are valued by culinarians. 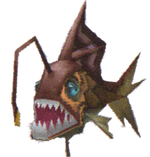 Oceanus is an enemy fought at the Underwater Temple, being one of the strongest enemies in the dungeon. It attacks primarily with physical attacks such as Rage and Body Slam, and can drop the Aqua Rod upon defeat.

[view · edit · purge]Oceanus was a pseudo-geographical feature in classical antiquity, believed by the ancient Greeks and Romans to be the divine personification of the World Ocean, an enormous river encircling the world.