Undying, we Occuria light the path for wayward sons of man. Oft did we pass judgment on them so that Ivalice might endure. Eternal, we are hist'ry's stewards, to set the course and keep it true.

Gerun, leader of the Occuria

The Occuria are the most powerful beings in the world of Ivalice in Final Fantasy XII. They are referred to, by themselves and others, as "The Undying", though their existence is unknown to Ivalice at large. The Occuria live high above Giruvegan, higher than any airship can reach. The passage there is located at the bottom of the Great Crystal.

Despite apparently being responsible for much of the development of Ivalice, the Occuria only appear in Final Fantasy XII and are only briefly mentioned in Final Fantasy XII: Revenant Wings, without so much as a mention in the rest of the Ivalice Alliance. The Occuria are willing to do whatever it takes to modify the course of Ivalice to their standards, including using phantom images of loved ones to manipulate people and sealing away insubordinate races who refused to accept the Occurian weave of fate.

The Sage Knowledge available via the bestiary suggests the Occuria used to live in Ivalice among the other races before withdrawing into their own realm.[note 1] The aletap rumor for the High Arcana may give a clue as to the nature a "god's" existence: "Souls and entites, though vague and lacking in substance, are nonetheless possessed of great power. No great surprise, for are they not the source of life's energy? Were these two essences to become one, you can imagine the result, I am sure. It is said that the high arcana is nothing less than the product of this union. And it is my belief that in these beings we may perceive the true form of the gods."

The Occuria are apparently genderless, though they possess masculine titles and multi-layered voices that speak in unison that sound simultaneously male and female. Gerun and the messages carved onto pillars in Pharos speak as a collective with pronouns "we" and "us" and "our", but Venat refers to itself with singular pronouns. The Occuria can create and appear as "ghosts" and images as well as render themselves invisible and inaudible to anyone other than the people they want to see and hear them. Their natural form is a floating specter with an ornate, armor-like appearance.

The Occuria have no visible faces, only glowing yellow lights whose placement is reminiscent of eyes floating in an empty void, vaguely reminiscent of a Black Mage. Similar glowing lights are also seen through their ornate statue bodies. An Occuria's physical manifestation exudes a great deal of Mist.

They can possess other beings, and merge with them to drastically increase their strength and power. The Occuria are said to be immortal but can die if they merge with or possesses mortals who are killed.[note 2] Occuria may be unable to, or have a diminished capacity to, directly interact with the physical realm, as they use mortals to do their bidding to achieve their goals back in Ivalice.[note 3]

Within their realm, the Occuria are associated with elaborate statues that depict various winged and fantastical beings, appearing in front of them to speak with their Chosen Saint. The one statue missing from the circle belongs to an Occuria the others consider a heretic.

The Occuria are associated with nethicite, stones that hold and exude Mist; swords that have the power to cut through nethicite that seemingly only they can create or bestow; and Espers, powerful entities that have been "banished" to the Mist realm unless called forth to the physical realm by the one who controls them.

The treaty held with kings of old is but a mem'ry, cold and still. With you we now shall treat anew, to cut a run for hist'ry's flow.

Many thousand years ago, all-powerful beings looked down upon the land, and their rule was absolute. They commanded all things on the earth. All was done according to their will. Then one day they withdrew behind the walls of a great city of their own making, disappearing from history's stage. In the vacuum left behind, Ivalice fell into chaos, until the march towards a new age finally began.

The Age of Gods, Sage Knowledge

Occuria are concerned with controlling the course of Ivalice's history and created the Espers as their servants. The Espers came to believe themselves as powerful as their creators and tried to destroy them. The revolt was led by the Esper Ultima, with the only Esper not included being Zodiark. The Occuria threw them down and bound them with glyphs.

The Occuria tried to influence the garif and granted them deifacted nethicite. The garif could not wield or control the magickal stones and would only worship the Occuria. The Occuria tried again, successfully this time, to influence the world of Ivalice by offering the nethicite to a man who would destroy or subjugate other nations as they directed. This man was King Raithwall, who would become the Dynast King.

At some point in the intervening time, one of the Occuria went rogue, disagreeing with the Occurian philosophy as well as perhaps the apparent Occurian leader, Gerun. Venat concocted a plan to create nethicite that was not under the control of the other Occuria: manufacted nethicite. Venat accomplished its goal with the aid of Dr. Cid of Archadia, with the Emperor's son Vayne Carudas Solidor aiding them by setting up the Empire's war against Rozarria and taking the shards cut by Raithwall from the locations they conquered. Enraged at Venat's heresy, Gerun and the other Occuria decide to bring forth a new Dynast King to destroy Archadia and restore the status quo they had created.

The Occuria's choice is Ashelia B'nargin Dalmasca, whom they manipulate by creating an image of her late husband Lord Rasler, which she mistakes for his spirit. She meets them in person after traveling to Giruvegan, an ancient abandoned city implied to have been built by the Occuria. It leads to the Great Crystal, a colossal magickal labyrinth that appears to reach deep to the inside of the planet itself. After finding a way stone in its depths, Ashe is spirited away to meet the Occurian council in a celestial plane where the Occuria appear to her from elaborate statues set on a floating disc. The Occuria reveal their intent of controlling Ivalice's history, though they explain it to her by claiming that if history is not in their control it would lead to disaster.

To ensure she does what they intend, the Occuria give Ashe the Treaty-Blade to cut a new shard of nethicite from the Sun-Cryst, the motherlode of nethicite, tempting her to use its power to take revenge on Archadia and restore her kingdom of Dalmasca. When she reaches the Cryst, however, she realizes Rasler would not want her taking revenge, and realizes what she thought was his spirit was just an illusion created by the Occuria. Though the Occuria try and convince her to take the nethicite, Ashe informs she will not be their pawn and destroys the illusion as well as the Sun-Cryst, ensuring the Occuria will never crown another Dynast King.

Venat accompanies Vayne aboard the Bahamut. During the battle above Rabanastre Vayne uses the power of the nethicite to transform into Vayne Novus, but is mortally wounded by Vaan. Venat protects Vayne as he stumbles out onto the superstructure of the Bahamut's Mist cannon. Vayne apologizes to Venat for not being a true Dynast King, but Venat tells Vayne their goals have been fulfilled as the Age of Stones is over, and that they will walk the path of death together. Venat fuses its powers with Vayne, transforming him into The Undying, but Ashe and her friends defeat him regardless.

When Balthier explains the origins of Lemurés, an image of the Occuria appears. When the Occuria tried to control the aegyl like the other races, the aegyl fled to the floating continents. Angered, the Occuria used the auraliths to create a barrier around Lemurés to trap those who would not follow them. Over the years, the aegyls' resentment towards the ones who chased them out their homelands grew.

Imprisoned above the clouds, the aegyl leader, Feolthanos, became consumed by his vindictiveness. Associating the Occuria's meddling with the wills of the entire Ivalician land, Feolthanos plots a crusade against the "underworld" from his Keep of Forgotten Time. The destruction of the Sun-Cryst and repudiation of the Occurian mandate dissolved the barrier around Lemurés and allowed Feolthanos to send the Judge of Wings to wreak havoc on the world from which the Undying exiled his people.

The music that plays when the player meets the Occuria in the Great Crystal is called "Abandoning Power".

The Occuria were first designed to be a race of mindflayers, as revealed in the Final Fantasy XII Ultimania Omega. Earlier concept artwork reveals these "mindflayers" are draped in luxurious robes and turbans. They were depicted lounging in their bar and smoking pipes. Revisions were made and the Mindflayer was placed as a Mark, retaining the initial design.

Occurian speech resembles an archaic, poetic form of Received Pronunciation English absent of particular rhotic vowels in both speech and writing. The rogue Occuria, Venat, speaks in iambic pentameter, while the other Occuria speak in iambic tetrameter, both commonly used types of metrical line in traditional English poetry and verse drama.

The decision to use metered verse with an unusual rhyme scheme came about as a solution to the problem presented by the voice processing used for the Occuria in the Japanese. The multiple layers of voice had an otherworldly sound but made it difficult to discern what was being said though helped by the on-by-default subtitles. The localized version has subtitles off by default, so the translators needed something else to differentiate their speech. The actress used for the Occurian leader Gerun, Bernice Stegers, is a British stage actress who knew what to do with the lines.[1]

Gerun, the leader of Occuria.

The world of the Occuria. 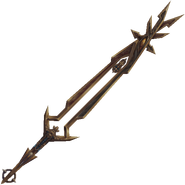 An Occurian-wrought blade, the Sword of Kings. 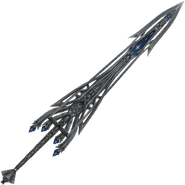 The name Occuria may derive from the word curia, a word that comes from the Latin coviria, meaning "men community". The word curia refers to the subdivisions of a tribe in ancient Rome, the Roman senate during the republic and any of several medieval councils or courts of justice, reflecting the Occuria's role as the leaders of Ivalice.

The oc- prefix may derive from the English word "occult" meaning hidden or secret.

The name Occuria may also derive simply from the English words "occurrence" or "occur" as the Occuria have displayed a sense of entitlement over the history of Ivalice and are known to have directly influenced its actuation until the events of Final Fantasy XII.