Speeds up when damaged. Vulnerable to lightning, but chucks a Mute Ball at anyone casting Thunder. Use a nearby object to escape its mighty Blitzball Rush.

Oblitzerator is a boss in Final Fantasy X. It is a machina weapon commanded by the Al Bhed and is fought by Tidus, Lulu, and Kimahri on a ship leaving from Luca Dock No. 4 after Yuna is kidnapped by the Al Bhed Psyches. It fights by shooting blitzballs at the party.

There is a one-in-three chance that Oblitzerator will counter with a barrage of blitzballs. For physical attacks, the counter causes Darkness; for magic, they cause Silence. On its turn, Oblitzerator will use Blitzball Rush, which randomly hits the whole party for high damage.

With 6,000 HP, Oblitzerator can be a difficult battle, especially since its Agility will increase with every turn and Yuna is not available to heal the party or call an aeon.

Tidus will notice a crane on the deck, which needs to be hit with Thunder three times before he can use the Trigger Commands to activate it and remove Oblitzerator's top half, weakening and lowering his HP to 1/16th (a maximum of 375).

Tidus should cast Cheer for his and Kimahri's Strength, and use Haste on Lulu so she can unleash many Thunder spells. She should use Focus a couple of times to ensure the Overkill. 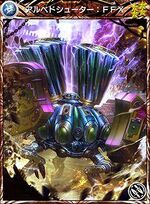 Retrieved from "https://finalfantasy.fandom.com/wiki/Oblitzerator?oldid=3293595"
Community content is available under CC-BY-SA unless otherwise noted.