Spear made from a magic stone.

The Obelisk is Freya's seventh spear in Final Fantasy IX. It teaches Cherry Blossom, a Dragon ability that damages all enemies with magic, and Initiative, a support ability that lets the party get the pre-emptive attack more often. The Obelisk has a 1 in 10 chance of petrifying her target when she uses Attack with Add Status active. The Obelisk is a missable weapon.

The Obelisk is bought for 6000 gil from Desert Palace prior to the player entering the Shimmering Island portal.

The Obelisk's damage dealt with a normal Attack is determined as follows everywhere but within Ipsen's Castle:

The damage is then modified by variables like Freya's row position and equipped Killer abilities and MP Attack, as well as the enemy's Protect. Under Mini, her Bonus would be 1.

When Freya equips Add Status, using Attack (or Charge! or Counter) with the Obelisk has a 1 in 10 flat chance of petrifying a susceptible target.

By the time the player can buy the Obelisk, Freya may already have her ultimate weapon, the Dragon's Hair, or the superior Holy Lance from Ark. If the player is not doing the Chocobo Hot and Cold quest and did not steal from Ark, then the Obelisk is Freya's strongest weapon for world map exploration with a flying transport, and the exploration of Terra before the Holy Lance can be bought from Bran Bal.

It is worth activating Add Status when using the Obelisk as it sometimes petrifies the enemy, which is effectively the same as Instant Death. Defeating enemies with Petrify forgoes EXP from them. However, the preceding Heavy Lance has a very similar effect that activates more often, Stop.

The ability the Obelisk teaches, Cherry Blossom, is useful against groups, but against single enemies, Freya can just use Jump or Attack with a Killer ability or MP Attack for similar damage; the boon of using Cherry Blossom is that it does not wake up sleeping enemies. Obelisk is the earliest chance for Freya to learn Cherry Blossom, though she can also learn it from the Kain's Lance. The Initiative ability, meanwhile, is more of an extra ability the player can equip if they have Magic Stones left over after equipping all the crucial abilities. 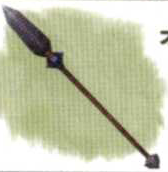 [view · edit · purge]An obelisk is a tall, four-sided, narrow tapering monument which ends in a pyramid-like shape at the top, and is said to resemble a petrified ray of the sun-disk. A pair of obelisks usually stood in front of a pylon.