Oaken Pole (樫の棒, Kashi no Bō?), also known as Oak Pole, is a recurring weapon in the series. It is usually the weakest pole or a low-ranked staff weapon in the games it appears in.

Oak Pole is a staff that provides 37 damage and 402 delay. It deals 5.52 damage per second and accumulates 103 TP per hit. It can be equipped by level 40 Monk, White Mage, Black Mage, Summoner, and Scholar. It can be bought for 37,440 gil from Coumuna in Upper Jeuno (H-8). It can also be bought for 156 Sparks of Eminence from Isakoth in Bastok Markets (E-11), Rolandienne in Southern San d'Oria (G-10), Fhelm Jobeizat in Windurst Woods (J-10), and Eternal Flame in Western Adoulin (H-11).

The Oaken Pole is the weakest pole weapon, providing 27 attack and 12% combo rate. It requires the Poles 1 License to equip and can be bought for 1,300 gil at Rabanastre and Bhujerba, or found as a random treasure in the Barheim Passage (Zeviah Subterrane).

In the Zodiac versions, it provides 15 Attack, 30 Evade, 25 CT, 15% combo rate, and requires the Poles 1 license for 20 LP. It can be bought in Rabanastre, Giza Plains - The Dry, Barheim Passage for 450 gil, found as a treasure in the Garamsythe Waterway (No. 11 Channel (Flooded)), or dropped by Specter (3% chance).

A quarterstaff made from the branch of a hardwood tree. This long, unrefined bludgeoning weapon does not deliver any added effects, such as increased Spirit Power. It makes a good weapon for monks well-versed in its use and for white mages who want to participate in combat while conserving MP.

In Bravely Default, Oaken Pole is a staff that provides 13 P.ATK and 90 Aim. It can be bought in Ancheim for 250 pg.

In Bravely Second: End Layer, Oaken Pole is a staff that provides 12 P.ATK, 90 Aim, and deals 50% more damage to undead. it can be bought in Al-Khampis for 300 pg, or found in Pilgrim's Grove. 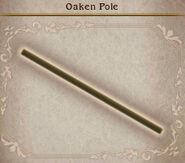 [view · edit · purge]An oak is a tree or shrub in the genus Quercus. The common name "oak" may also appear in the names of species in related genera, notably Lithocarpus.