Staff made from a legendary tree.

The Oak Staff is Vivi's fifth staff in Final Fantasy IX, though it can be obtained early if the player prioritizes the chocobo sidequest. It teaches him the Stop spell, which attempts to take an enemy out of the action and effectively works like an Instant Death spell; Bio, which damages and attempts to poison a group of enemies so they take passive damage over time; and Drain, that lets him steal HP from a target. It has innate Slow status used through Add Status.

The Oak Staff is found in Chocograph 11, Small Beach, the last chocograph found in the Chocobo's Forest when the chocobo quest first becomes available (the player needs to head to Chocobo's Lagoon to find more). If the player takes their time to find all chocographs and world map treasures at the earliest, they can get the Oak Staff before even going to Burmecia and obtaining Vivi's three elemental staves.

The Oak Staff is stolen from Ralvuimago and Soulcage, and bought for 2400 gil from Conde Petie, Black Mage Village (before going through the Shimmering Island portal), Alexandria, Treno (after returning from the Outer Continent), and Ipsen's Castle.

The Oak Staff's damage dealt with a normal Attack is determined as follows everywhere but within Ipsen's Castle:

The Oak Staff has innate Slow; Vivi will slow the susceptible target of his Attack 1/5th of the time when he has Add Status equipped.

If acquired at the earliest, the Oak Staff is Vivi's strongest weapon for use in world map exploration, Burmecia, Cleyra's Trunk, Cleyra bosses, Alexandria Castle, Gargan Roo, Fossil Roo, Outer Continent, Conde Petie Mountain Path, the Iifa Tree events and the optional exploration during the Treno card tournament, until the superior Cypress Pile can be bought from Lindblum. However, as staves only offer Attack power and have no effect on Vivi's spellcasting ability, his weapon stats are less relevant to him than what abilities they teach, though the Oak Staff also has one boon for physical attacking: Slow. Though Vivi also has the Slow spell, attacking with the Oak Staff may be better as it works fairly often and will not use up MP or entirely waste Vivi's turn if the status does not take effect.

Even if Oak Staff was Vivi's strongest weapon when earliest obtained, it is still worth procuring and swapping to the elemental staves to learn his second tier elemental spells.

The spells learned from the Oak Staff are also good. Stop takes an enemy out of battle if it works, but so never works against bosses. Enemies defeated via Stop also do not yield EXP, though this could be desirable for a min-maxing playthrough. Bio is much better than Vivi's Poison spell, and Drain lets him heal himself while also hurting an enemy, as long as the target is not undead. 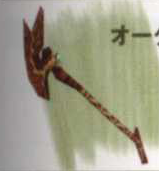