O'aka has floppy red hair with a small black hat secured with string under his chin. He wears a short brown waistcoat that reveals his stomach under a blue shirt, baggy beige trousers, open sandals and gloves. He wears a pack of wares. Unlike most Spirans, O'aka speaks with a Cockney accent, like Wantz.

O'aka is at first pompous and rude, commenting on Tidus's clothes and income, but he proves himself a valuable asset later, being there when they need him and providing occasional discounts. O'aka can be sneaky, slipping past guards and security, but his motives to help Yuna and the party are close to his heart. Despite the disagreements they get into, O'aka does care for his brother Wantz. O'aka learned many of his skills, like silver-tongued negotiations and disguises, from his forebears.

O'aka first appears in Besaid village, though Tidus does not officially make his acquaintance until sailing on either the S.S. Liki or S.S. Winno, depending on if he goes below the decks on the way to Kilika or not. When Tidus first encounters O'aka, he comments on Tidus's clothes and says he looks poor. O'aka introduces himself as a merchant and appears in many locations afterward, including Luca and Mushroom Rock Road during Operation Mi'ihen, where he snuck past the guards.

O'aka finds his way to the Moonflow, and later to Lake Macalania. He uses a sphere before escaping from guards after the party kills Seymour Guado and his accomplice guards. He is again seen in Bevelle before the party fights Seymour for the second time. When the party runs into his brother, Wantz, on Mt. Gagazet, he reveals O'aka has been captured by Yevon for conspiracy—namely for supplying goods to Yuna and her party with knowledge of Maester Seymour's recent death.

O'aka escapes and returns to Luca (only if the player spoke with Wantz on Mt. Gagazet), pledging to leave the merchant life. When the player runs into him at the theater entrance, O'aka mentions his sister dying during her duties as summoner. It is in this conversation where he reveals his motivation in helping Yuna, whom he feels looks a lot like his sister.

After Yuna and her guardians felled Sin O'aka bought the Lake Macalania travel agency from Rin. When the temple sank to the bottom of the lake, O'aka found himself with few customers to sell to and in debt to the Al Bhed. Helping O'aka by stowing him away aboard the Celsius, the Gullwings buy his merchandise so he can pay his debts. Once solvent, O'aka returns to the agency and finds his debt collectors killed off by the fiends stirring from the sunken Macalania Temple. Adamant to honor the debt collectors as he would never be able to pay them, O'aka remains in the travel agency and offers accessories for affordable prices to travelers. O'aka later reconciles with Wantz and takes him in as his assistant.

If the Gullwings turn O'aka in to the Al Bhed, he will work his debt off at the Southern Expanse in the Bikanel Desert. The Gullwings can otherwise bring him to their airship. Yuna can talk to O'aka on the CommSphere, and spot him in the hot springs area in Mt. Gagazet in a CommSphere event. In a Fiend Tale scenario, O'aka encounters an Elder Zurvan whom his great-grandfather stole a treasure sphere from and outwits the Imp as his grandfather and father had done in similar confrontations.

O'aka is mentioned to have started a new business with Cid at Mt. Gagazet's hot springs, though it is not a successful venture for either.

At O'aka's first four locations, the player has the opportunity to donate him gil to start up his business.

The amount of money the player gives O'aka determines the prices at his shops at the Mushroom Rock Road, in the following manner:

The player can also affect O'aka's prices at Macalania Woods, Lake Macalania, and Macalania Temple (the latter two depending on what was said in Macalania Woods), see these shops below:

The player can't buy anything, but they can give O'aka money.

The weapons available have Slowtouch for Tidus, Poisontouch for Wakka, and Lightningstrike for Kimahri. The armor pieces have MP +5% for Yuna and Lulu and Fire Ward for Kimahri.

O'aka is found on the Oldroad.

O'aka's pricing depends on how much gil the player donated to him earlier. The tables below indicate his prices at 100%. The weapon for Tidus has Icestrike and the shield for him has HP +5% and Defense +3%. The weapon for Yuna has Magic +3% and Sensor. The ring for Yuna and the bangle for Lulu slightly boost HP and MP with HP +5% and MP +5%. Wakka's armor piece gives HP +5% and SOS NulFrost and Auron's bracer has Slow Ward and one empty slot.

O'aka's pricing depends on how much gil the player donated to him earlier. The tables below indicate his prices at 100%.

O'aka's pricing depends on how much gil the player donated to him earlier. The tables below indicate his prices at 100%.

The weapon for Tidus has both Firestike and Icestrike. The weapon for Wakka has Strength +3% and Strength +5%. The weapon for Kimahri has Magic +5% and Poisontouch. For the armor pieces, Yuna's and Lulu's give Defense and Magic Defense at 5%, and the bracer for Auron gives Poison Ward and SOS NulShock.

Appears after viewing Jyscal's Sphere in the Nuns' Chamber.

O'aka's debt changes based on the game mode. If playing New Game, his debt will be 100,000 gil. In New Game Plus, however, it has been reduced to 1,000 gil. He will remain on the airship until Chapter 3, even if his debt has been paid off. His prices will be greatly reduced to the point where the player can buy cheap items from him and sell them to Barkeep for a profit. Paying off his debts will unlock the "Millionaire" trophy/achievement in Final Fantasy X-2 HD Remaster.

This shop is only available after obtaining an Episode Complete at the Macalania Travel Agency during Chapter 5. 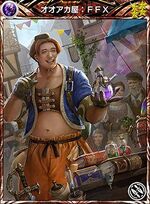 O'aka is voiced by Dwight Schultz in the English version.

O'aka on the Highbridge in Final Fantasy X.

O'aka in a CommSphere event.

In Final Fantasy Type-0 the phantomist Akane has a boyfriend, called O'yah, who is initially cursed and turned into a toad. After he is healed after visiting the Valley of Monsters, he will accompany her to every location she can be met. In Bethnel Caverns, he will say "Y'know, getting turned into an amphibian helped me realize what I really want in life: marry my girl, have a kid, and run our business—as a family! It'll be like one of those little mom-and-pop shops. I'm O'yah, and she's Akane, so maybe we could call it 'O'yah and Akane's'! ...No? Maybe something with a little more zing, like 'O'aka's'! ...Still no?"