NulDeath is a level 7 White Magic spell which grants Resist Death, Resist Status, and Resist Earth to all allies. As such, this effectively grants resistance to most status inflicting spells and immunity to the spells Blind, Stun, and Kill.

The spell can be bought at Onrac and can be learned by the White Mage, White Wizard, and Red Wizard job classes. In the GBA/PSP/iOS releases it costs 28 MP to cast.

Magick Barrier is an enemy ability used by Vyraal, Goliath, Vayne Novus, and The Undying, which grants the Anti-Magick augment, preventing magic damage for two minutes. 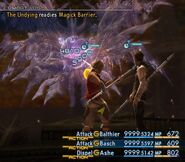 Final Fantasy XII.
Add a photo to this gallery

This gallery is incomplete and requires Final Fantasy Brave Exvius. added. You can help the Final Fantasy Wiki by uploading images.
White Magic
Retrieved from "https://finalfantasy.fandom.com/wiki/NulDeath_(ability)?oldid=3408903"
Community content is available under CC-BY-SA unless otherwise noted.