This upgraded model maintains the properties of the original, while boosting overall power and ATB capacity.

Nue (ヌエ, Nue?) is a recurring weapon in the series.

There are a few traits all ultimate weapons have in common regardless of which weapons they were upgraded from: they all require a Trapezohedron to be upgraded from the tier two weapon, and they all have the ability "ATB: +1" along with any other passive abilities, increasing the character's ATB gauge slots by one. As a penalty, wielding an ultimate weapon drastically decreases target times in battle, making it difficult to get higher battle rankings.

A boomerang from another world created through advanced techniques that incorporate the ingenious idea of hiding its form until ready to strike. Great in both size and power, there are very few who can handle this difficult weapon effectively. However, legends from the Nue's place of origin claim that a young boy was able to master its use completely.

Nue is a Throwing weapon, obtained as Hope's Trust Master. It provides 51 ATK and 82 MAG. 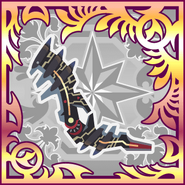 [view · edit · purge]A nue is a legendary creature found in Japanese folklore. It is described as having the head of a monkey, the body of a raccoon dog, the legs of a tiger, and a snake as a tail.