Various
The nu mou are a race in the Final Fantasy series, primarily found in Ivalice but also in The First. 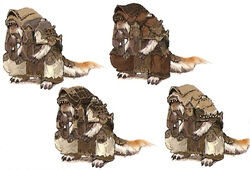 The nu mou have canine features, bearing elongated faces and tails. Their ears, long and thick with a hole near the end, are often decorated with various earrings. The nu mou's average height, ranging between 130–150 cm, coupled with their bent posture, makes them come across as small.

Nu mou have a lifespan more than three times that of humes. Their physical appearance remains mostly the same throughout their life, and even young nu mou have a generally aged look. Their hair is white, although the fur on their tail is often sandy in color. Skin shades vary between individuals, although they are often pale or dull.

Nu mou are ill-fitted for physical battle, but are proficient in magick. They have a highly developed intelligence, allowing them to excel in this field much more than the other races.[1] In addition to their magickal abilities, they can also call on the abilities of monsters to help. 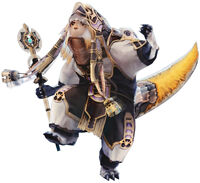 The nu mou's ability to control Mist and talent with magick allows them to implement stronger magick compared to other races. Their puny physique puts them at a disadvantage when it comes to melee fights. They are generally interested in scholarly activities and music.

The nu mou are a people of legends and tradition, passing down many tales, their most well known being the legend of the Espers. A reserved race, they generally live quiet lives. Most are found on the sacred Mt Bur-Omisace where, as part of the Kiltia sect, they take care of pilgrims and those wounded by war.[1] The rest are scattered across Ivalice.

Ma'kenroh (who bears a name similar to one of the randomized names in Final Fantasy Tactics Advance, Mackenroe) is the first nu mou the party normally encounters, when they visit Montblanc's Clan Centurio in Rabanastre. He stands atop the stairs, beside the viera named Krjn, and will give clues to the location of Vaan's current Mark.

Ma'Kleou waits by the cliff in the Nabreus Deadlands, and gives the party a quest to find three medallions, which lead to a hidden Esper in the Necrohol of Nabudis. As part of this quest, Vaan will meet Roh'Kenmou in the residence of Old Dalan, and Roh'Kenmu, with a nameless associate, in the Magick Shop in Archades.

Another nu mou, Ashkroft, became a master of the dark arts and was sealed by Gran Kiltias Anastasis. He becomes the Piscodaemon Mark after the death of Anastasis.

Nu mou are a race of fae folk that live in the village of Pla Enni in Il Mheg, in Norvrandt. They are a people who love to aid the races of man. Due to their dog-like traits, they cannot resist aiding those who give them commands (i.e., fetch, roll over, heel). Nu mou have a code of honor that dictates the payment must precisely fit the service; be it an item or task, they ask and give for no more or less than what is requested.

Before it was destroyed by the Flood of Light, the nu mou were close allies of the kingdom of Voeburt.

Their village, Pla Enni, gets its name from a type of mushroom that the nu mou build their homes out of and use the spores from to make magical concoctions. Nu mou are accompanied by familiars called porxies, which are crafted from clay and water and brought to life with magic.

Nu mou who have turned their back on their people's way of life live in a cave called Father Collard's Chambers and are called the lawless ones. They refuse to work, instead spending their time being nuisances, such as by robbing other nu mou.

Beq Lugg is a nu mou who is an expert in magicks related to the soul, and is called upon by the Scions of the Seventh Dawn to help them return from Norvrandt to their home world, the Source.

The nu mou are the most skilled race in the magic field. Lacking characteristics that would make them fit for the frontlines, they usually support allies from the back. There are only two nu mou important to the story: Babus Swain, the personal assistant to Prince Mewt, and Ezel Berbier, the creator of Anti-Laws.

Their jobs are overwhelmingly magic-based, though Sages and Beastmasters are adequate in melee battle. They can control monsters with the Beastmaster class, and are the only race to get the Morpher class which lets them use the abilities of monsters in the Cyril Monster Bank.

The Totema of the nu mou is Ultima.

Canine features and long, droopy ears set this race apart. Even-tempered and thoughtful, they possess the capacity for great intellect. Like moogles, they shun water and avoid it to all cost. Though ill-suited for the front lines of battle, they make incomparable mages and weavers of magick.

The nu mou are of the same appearance as their counterpart in Tactics Advance. They can no longer enter water unless equipped with Winged Boots. There are nine jobs for the nu mou, with two being new jobs: Scholar and Arcanist, although Morpher was removed from this game.

Nu mou can be recruited in these locations during Rosefire or Coppersun:

Nu mou appeared as part of the Crystal Defenders collaboration. 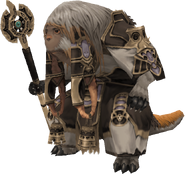 Nu Mou in the Final Fantasy Tactics A2 after main menu introduction.