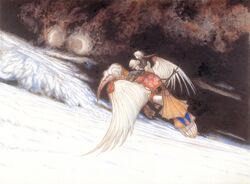 "Not Alone" (独りじゃない, Hitori ja nai?, lit. You're Not Alone) is a musical theme from Final Fantasy IX composed by Nobuo Uematsu. The track is named after the events taking place while it plays in its game of origin. The theme then became associated with the game's protagonist, Zidane Tribal, and a popular theme among fans, and was subsequently arranged and included in live performances.

"Not Alone" plays during the various battles and events at Terra's Castle Pandemonium. Zidane's friends support him while he commands them to leave, a result of Garland divulging Zidane's origins and purpose as an Angel of Death. "Not Alone" is not heard again after Zidane overcomes his struggles and he and his friends enter to confront Garland directly.

The event at Pandemonium was written by Event Planner Nobuaki Komoto, who dubs it his favorite work for the game. Until writing the event, Komoto was not even sure he liked Zidane, but working on the event endeared him to the character and helped Komoto see a new side of him. The theme "Not Alone" composed by Uematsu was not made specifically for this event. He had written the theme ahead of time, and liked it, and thus asked the developers if it could be used somewhere in the game. Komoto was told by his superior, Kazuhiko Aoki, of the theme and asked to find somewhere to use it, as Aoki also considered it a good theme. The event planners decided to use it for the Pandemonium event even before the event was finished. The moment they included the music to the scene they felt it was perfect for it, and that it would be hard for the event to live up to the music that would accompany it.[1][2]

"Not Alone" was released as the ninth track of the fourth disc of the Final Fantasy IX: Original Soundtrack album.

"Not Alone" appears in the music player as the fifth track of Memories of FFIX (Disc 1) - OST album purchased from Coernix Station - Cauthess for 100 gil.

The original version is a bonus battle theme bought from the PP Catalog with 240 PP. It was included in the Dissidia 012 Final Fantasy Original Soundtrack album as the thirty-ninth track of the album's first disc.

Once purchased, "Not Alone" may be automatically selected as the battle theme for battles including Zidane Tribal or Kuja, or taking place at the Crystal World or the M.S. Prima Vista.

The original PlayStation version was available as a reward from winning "Battle of the Gods – Act 4" (Jan. 2017). Dissidia NT also has a new arrangement as a battle theme.

"Not Alone" is a downloadable track for the iOS version as part of Final Fantasy IX's Other Field Music Bundle alongside "Melodies of Life ~ Final Fantasy".

"Not Alone" returns as a Field Music Sequence available in the base game.

"Not Alone" is a playable Field Music Sequence available by default.

A piano arrangement of "Not Alone" by Shirō Hamaguchi is featured in this album. It is the album's eight track.

A classical guitar arrangement of this song by Yuji Sekiguchi was featured in this album as its eighteenth track.

An arrangement of "Not Alone" by REXER was included in this album as its fourteenth track.

The a chiptune arrangement of "Not Alone" by Xinon was included in this 8-bit arrangement album of Final Fantasy IX as its eighth track.

"Not Alone" is the fifth song in this piano arrangement album.

An orchestral arrangement of "Not Alone" by Nobuo Uematsu and Shiro Hamaguchi was featured on the Tour de Japon: Music from Final Fantasy concert tour in 2004. It was the sixth song of the concert lineup.

This the orchestral arrangement of "Not Alone" was featured on the concert tour of "Dear Friends" taking place from 2004 to 2005. It was the ninth song of the concert line-up.

A concert recording of "Not Alone" appears on this album.

The original version of "Not Alone" was included in this compilation of themes performed at the Dear Friends concert tour.