Norvallen is a forested region of central Quon in Final Fantasy XI. The Kingdom of San d'Oria still claims that the Norvallen Region is under its reign—though it may not necessarily be under its control. Located on the Mossoulie Peninsula, this region is home to numerous locations that have played great roles in Elvaan history. The Eldieme Necropolis, for example, is considered by them as a holy land. However, war has taken its toll on the region, altering the landscape in a dramatic fashion.

In contrast to the lush woodlands that are found in the Jugner Forest, Batallia Downs is a nearly barren wasteland. This fate became the downs when, over twenty years ago, nearly all of its trees were cut down and the lumber was used to construct bulwarks to fend off beastman attacks.

This area is subject to conquest. 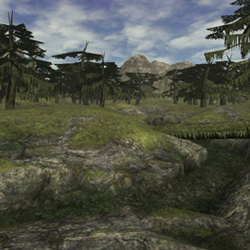 Located to the east of the Kingdom of San d'Oria, this vast, dense woodland is often shrouded in darkness—even during the day. Before the construction of a main road that connected the adjoining areas, travelers and merchants often shunned the Jugner Forest; all would fear the ferocious beasts that lurked in the shadows of the mighty trees. Even today, only a large caravan protected by hired mercenaries could survive an attack from the Orcs and Goblin raiders that prey on passersby. The region's outpost is located in center this zone.

There are two Cavernous Maws in this zone. A frozen maw in the south central leads to Jugner Forest of twenty years in the past. The active maw just east of the outpost leads to a version of the Vunkerl Inlet in the alternate reality of Abyssea. 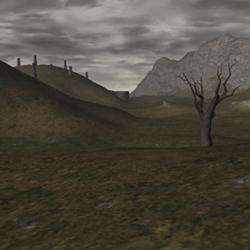 During the Great War, the Batallia Downs was the location of the infamous Battle of Jeuno. The scars left from this epic confrontation still litter the region. The looming Achaque Mountains situated in the northern part of the area prevent possible intruders while hampering the travel of adventurers. Finally, the Artisan Bridge connecting the Norvallen Region and the Grand Duchy of Jeuno is located on the downs' far eastern shore.

A Cavernous Maw connects this area to itself twenty years in the past.

The ancient Elvaan built these burial mounds, also known as the Coveffe Barrows, in an attempt to bring themselves closer to the Goddess Altana in death. Within the San d'Orian Church, to spend one's final days on Vana'diel within these tombs was often considered the greatest blessing before departing to the afterlife.

This resulted in a wave of followers traveling to the barrows and constructing the underground necropolis that remains there to this day. However, during the Great War, these catacombs were also the sites of fierce battles that left thousands dead or injured. The spirits of these lost souls still roam the tombs below.

During the Great War nearly twenty years ago, an attack was made by the Orcish troops on the peaceful Elvaan monastery of La Vaule, which left the tiny sanctuary in ruins and under the control of the beastmen. The Orcs renamed the area "Davoi" and transformed the area into their main stronghold, delighted by the layout of the surrounding area, as well as the protection that the monastic caverns provided. While there have been many attempts by the San d'Orian Royal Knights to reclaim this area, the ever-weakening forces of the kingdom remain powerless in this fight and often rely on hired adventurers to assist them in their campaigns.

Deep within the recesses of the Orcish stronghold of Davoi is the Monastic Cavern, home to the leaders of the Orcs. The old peaceful Elvaan monastery, which used to welcome travelers from far and wide, is now dangerous for any and all adventurers to even step foot in. Deep within is Overlord Bakgodek, the current leader of the Orcish hordes.

This river is traveled on a fishing barge that travels between any of the three landings.

While the zone contains much of the same types of fauna seen in Jugner Forest, it contains one particularly unique inhabitant, the flytraps. This zone requires the Chains of Promathia expansion to access.