North Corel is a field map in Final Fantasy VII. It is a town in the Corel Area on the western continent, located at the foot of Mt. Corel, and is a stepping stone to the Gold Saucer. North Corel is visited briefly in "Barret's Past" by Cloud's party. It is later the subject of one of the quests in "Struggle for the Huge Materia" when visited by Cid's party, and a few important items can be obtained depending on the player's success in the latter.

North Corel is located to the north on the western continent. It is the ramshackle remains of a mining community. The north entrance leads to Mt. Corel, whereas the south leads to the Corel Area on the world map. On the west, the ropeway leads to the Gold Saucer.

The main town has three merchants: the Tool Shop on the top-right, the General Store on the bottom-right, and the Weapon Shop on the left. A few non-player characters are also wandering around for some dialogue. On the top plateau is the rundown hut, and a ladder up to the inn.

If the train crashes into North Corel, the town changes in appearance, with different non-player characters roaming the area, and fewer settlements. One of the non-player characters that now roams the tent is the boy from the tent, who sells the Ultima Materia he found in a well for 50,000 gil (if the player stopped the train, he will be found in his usual tent and give it for free).[1]

The inn is in the top left corner of the field map found on the highest plane of the town. The inn only costs 50 gil.

The tent is located on the lower plane to the left of the engineer's tent. An old lady and a boy live here, and the tent is destroyed if the train crashes into North Corel.

The boy who lives here finds Ultima Materia in a well. It will be available from him here if the player's inventory is full after stopping the train.

The programming of the dialogue in this room seems to equate obtaining the Mt. Corel Huge Materia with having stopped the train, and therefore if the player failed to catch up with the train, but reclaimed the Huge Materia from the Shinra No. 26, Ultima will become available and the woman will tell the main character they saved her life.[1]

There is a map of the real world Japan on the wall.

Located on the right side of town on the lower plane, the engineer's tent contains an old train engineer and a girl. The girl will simply complain that the old man, her grandpa, only thinks about coal trains; if a coal train passes through North Corel as a result of the Huge Materia quest, he will have been excited and his dialogue will slightly change.[1]

The rundown hut is located on the plateau, and is home to a family with a dog, child, and a man and woman. The woman has lost her past husband, and after the Huge Materia quest, will give the Catastrophe manual as her last memory of him.[1]

The station is to the east of the town and takes the party to the Gold Saucer. The first time the party comes to North Corel, taking the ropeway advances the story, and Barret's flashback will play.

In "Barret's Past", North Corel is visited very briefly. When the party arrives, they must reach the Gold Saucer ropeway, as Barret details his past in a flashback. Following this, they leave for the next chapter, "Sanctuary of Amusement".

In "Struggle for the Huge Materia", the Mt. Corel Huge Materia quest ends with the player at North Corel, and the result has a great effect on North Corel:

After the event, the Catastrophe, Barret's Limit Break manual, becomes available from the woman with the green hat in the Rundown Hut.

Disappears if the player fails to stop the train.

Disappears if the player fails to stop the train.

"Mark of a Traitor" from Final Fantasy VII

The music that plays in North Corel is "Mark of a Traitor" (裏切り者の烙印, Uragirimono no Rakuin?), which contains the motif of "Barret's Theme".

Shinra's coal train can crash into North Corel even though there are holes in the Mt. Corel tracks left by the party's exploration that were never fixed and boulders on the tracks in the area where the party had to lower a bridge to get across. 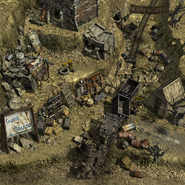 Town if the player fails to stop the train.