North Corel is a town in Final Fantasy VII. It is located at foot of Mt. Corel, on the western continent of the planet. The town was built by the survivors from Corel, which was destroyed by Shinra Electric Power Company. North Corel is a fairly new settlement made of very small dwellings, and serves mostly as a stepping ground for the resort of the Gold Saucer.

North Corel was built by the survivors of Corel after Shinra destroyed their town. Barret Wallace, once a resident of Old Corel, was blamed by the surviving townspeople for the town's destruction. He rarely talked about his past with others.[1]

In "Barret's Past", Cloud Strife and his party passed through North Corel on their world-wide hunt for the elusive Sephiroth. The other townspeople scorned Barret, who refused to argue with them, blaming himself. His past surprised others, as even Tifa Lockhart, who had known him longest, was unaware.[1]

Later, in "Struggle for the Huge Materia", after Meteor has been summoned and Cloud was lost in the lifestream, Cid Highwind took up the reins of acting leader and returned to the town. Cid's party arrived to fight Shinra and steal their Huge Materia, as one was located in the mako reactor of Mt. Corel. The Huge Materia was taken on a coal train before the Cid's party arrived, and the party jumped on a small pump-cart and raced to catch up with the train. After fighting their way through the Shinra forces, they took control of the train and saved the town, with the townsfolk now recognizing Barret as a hero.[2][note 1] 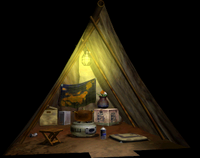 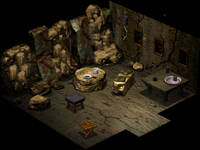 A tent (top) and hut (bottom) in North Corel, representing its run-down dwellings.

North Corel is located to the north of the western continent, at the foot of Mt. Corel on its western side, and adjacent to the platform for the ropeway leading up to the resort Gold Saucer. The town is built on barren desert terrain, and its entrance at the front of the town leads to a desert that is not normally traversable.

Since it is a relatively new settlement with a poor population, North Corel is just a collection of crude dwellings, with little of the advanced technology that makes up human civilization on the planet. This suggests that North Corel did not benefit from the nearby mako reactor in the mountain at all. Residents live mostly in tents built on the rocky ground, and merchants operate outside stores selling several piles of scrap nearby, with relatively few items of worth.[note 2] A shanty hut and an inn are situated on a plateau overlooking the rest of town, as well as the town's single well (possibly its only source of water).

North Corel is an impoverished town comprising the few survivors from Corel. As Corel was a coal mining town, many of North Corel's residents are themselves former coal miners that reminisce about their old life. North Corel's residents have a bleak outlook on life, with most resigned to having no future, and the few who do dream of better lives see it out of reach as they lack the funds. The town's children are generally left unaware, however, and maintain a childhood ignorance. One of the children at some point found an Ultima materia, and planned to sell it, though his only goal with the money was to visit the Gold Saucer.[3][note 3]

North Corel is visited briefly in the quest "Barret's Past" by Cloud's party. When passing through, the townspeople will scorn Barret, who explains his past through a flashback before the party moves on.

North Corel is later returned to by Cid's party for one of two "Struggle for the Huge Materia" quests. The player arrives at the town and must catch the Coal Train and must press

([CANCEL] in the PC version) in a repeating pattern until the train stops. If they fail to stop the train in time, the runaway train destroys North Corel and the Huge Materia is lost. If they succeed, North Corel is saved and the townsfolk recognize Barret as a hero, and no longer blame him for the loss of Old Corel.

"Mark of a Traitor" from Final Fantasy VII

The music that plays in North Corel is "Mark of a Traitor" (裏切り者の烙印, Uragirimono no Rakuin?), which contains the motif of "Barret's Theme".