From the Aerodrome to the desert wastes, I'll be there to keep the Strahl in tip-top shape, kupo!

Nono is a recurring moogle in games set in Ivalice. He is Montblanc's younger brother, making him one of the six moogle siblings. Nono is involved with airships and his outfit resembles a green color swap of the Tinker job.

Nono is the head mechanic of the Strahl. Whenever the Strahl is in port, he will maintain it. When Balthier first takes Vaan and the others to see his airship they are greeted by Nono in the hangar. After Dreadnought Leviathan has fallen, Nono can be met in the Rabanastre aerodrome saying the Strahl was damaged in the Mist explosion and will take a while to fix. It is Nono who installs the new skystone Reddas gives the party, and it can be assumed he is responsible for several of the other upgrades on the Strahl as well. After the party returns from Giruvegan Nono can be talked to at aerodromes' private flights sections to fly the Strahl.

He makes nice with Master Tomaj, but I see through his web of deception!

Nono still maintains the Strahl, but after the earthquake caused by Bahamut at the Muruc Cahuac Skysea, the Strahl breaks down and lands near Heaven's Vigil. Unable to repair Balthier's airship before a swarm of monsters arrives, Nono seeks refuge on Vaan's airship, the Galbana. He initially isn't too fond of one of their newest members, Cu Sith, who accuses the moogle of currying favor with Tomaj, but they set aside their differences for the good of the Galbana.

Nono is a moogle doll as part of "The Brothers Kupomazov" quest at the Moogle Chocobo Carnival.

Fourth in the line is little Nono,
fond of putting on a show.
Entertainer of the night,
he dances on a stage of light. 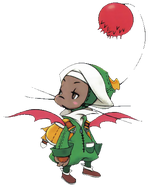 Nono is an apprentice Gadgeteer who runs a store based out of an airship, called the Brilliante in the Final Fantasy Tactics Advance Radio Edition. After his airship is attacked in a hit-and-run, Clan Nutsy meets with him at Baguba Port and agrees to confront the perpetrators at Jagd Dorsa. Later on, the mission is repeated when he is "hit again".

He is mentioned by Montblanc for making a "lugaborg" made out of Materite, which was a gift for Audience Day.

Nono's shop starts off with one set of Trade Items, and the list will replenish every time a game is played over a link cable.

In Final Fantasy Tactics Advance Radio Edition, Nono had already appeared in the beginning along with Montblanc, and was voiced by Masako Jō.

Nono never appears physically, but he is mentioned by Hurdy when he is talking to Vaan. Hurdy claims Nono left the Strahl and built his own airship called the Brilliante I with the gil he earned there.

Nono appears as a golden statue at the bottom of the journal after Sorbet and Horne when a certain amount of missions are completed.

In a side story "Chapter 4: Hurdy Heads for the Hills", Nono said that if Hurdy leaves later, he would offer him an airship, the almost-finished Brilliante I. He requested Hurdy the Goug Consortium catalog, which could be found at Goug.

Nono in an FMV from Revenant Wings.

Nono on the back cover of volume 1 of the manga.

[view · edit · purge]The name Nono is an uncommon Arabic word, which translates into "مشرف" (musharraf). It means either "administrator" or "supervisor".