When used as the party leader, the player controls Noel in battle and on the field. The party leader can be changed on-the-fly, but there are segments where Noel is not in the party. There is a boss battle that the player must do as just Noel, however. On the field, the main character can jump and use Mog's abilities. He can summon and command monsters via the Paradigm Pack system. His victory pose is to put his two swords back together into one and swing it onto his back.

Each paradigm role can attain level 99, and the Crystaria for Serah and Noel have twenty-two stages at each a bonus is selected. Serah has the superior Magic growth and Noel has the superior HP and Strength growth. There are two types of node spheres: small and large. Small spheres in the same positions tend to give similar stat bonuses on each playthrough, while the large are role-sensitive.

Noel begins with the Commando, Ravager, and Sentinel roles. He majors as Commando and Synergist. As a Commando, he learns Deathblow and Adrenaline, that give him a boost in low and high HP respectively, as opposed to Serah's siphon abilities that boost her ATB gauge. Noel's Attack command and elemental strikes as a Ravager consists of two hits, with his larger sword dealing 1/2, 3/4, or 5/6 of the total damage. His melee Blitz with Ravage will hit twice too, but again, with one of the blows dealing lower damage than the initial. Noel's full ATB skill is Meteor Javelin, a Commando ability that hits the enemy multiple times, but clears the chain gauge. The ability is thus best used when the enemy is about to recover from stagger.

As a Synergist, he learns protective spells to take less damage from enemies' attacks. Noel is a good Medic, as he learns spells that restore HP to the target proportional to the amount of damage the target has taken, and he makes a good Sentinel with his high HP. As a Sentinel, he learns Mediguard, which gradually recovers his HP while guarding, as opposed to Serah's Steelguard causing her to take less damage when attacked repeatedly. His counterattack ability is Entrench, which deals a more powerful counter the longer he has guarded, as opposed to Serah's Vendetta, which deals more damage the more damage she receives when guarding. As a Ravager, he specializes in Ice and Wind magic as opposed to Serah's Fire and Lightning magic, and he learns no passive abilities in this role.

He is not as proficient as a Saboteur, as he lacks the area-of-effect spells for that role and the Jinx passive ability, but can still inflict Deshell and Deprotect to cripple enemies' defenses.

Noel fights with two swords, which he can combine into a spear to jab enemies, and throw it like a javelin. In Noel's memories, it is revealed he chose to fight with two swords because he couldn't best Caius with a single blade. Some of Noel's swords, Volatile Spark (Exploda), Rune Tooth, Sargatanas, and The Tower, are references to Zidane Tribal's Thief Swords from Final Fantasy IX. 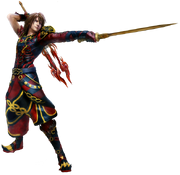 Downloaded outfits can be found in the "Outfits" section of the main menu. Alternate outfits are used in real time scenes and gameplay. Noel's alternate outfits are Battle Attire, which gives him a gold and red leather armor; Spacetime Guardian, blue and silver metal armor; N7 Armor, based on the armor worn by Commander Shepard in Mass Effect 3; Assassin's Creed, based on the costume worn by Ezio Auditore in Assassin's Creed Revelations; and Black Mage, based on the iconic Black Mage job class from the Final Fantasy series.