His second alternate costume, "Otherworldly Garb", is his original attire featured in several promotional trailers of his original intended appearance in Final Fantasy Versus XIII. Noctis wears a black knee-length turtleneck jacket with draconian markings on the shoulders and symmetrical black gloves on both hands, and his black cropped trousers and black boots are differently designed, with the trousers' length slightly longer and boots shorter in length and having brown soles. The first alternate coloration recolors his jacket grey with light grey draconian markings and trousers. The second alternate coloration recolors his jacket crimson with black draconian markings. 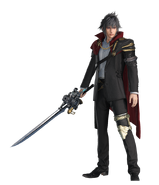 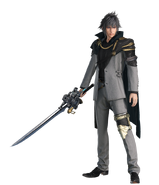 Royal Raiment A.
Add a photo to this gallery

Noctis equips swords, spears, greatswords and daggers. All weapons can be obtained and used by him in Final Fantasy XV. Swords are exclusive to Noctis and also serve as his main weapon, daggers and spears (or polearms) are the primary and secondary weapons, respectively, of Ignis; and greatswords are the primary weapons of Gladiolus. 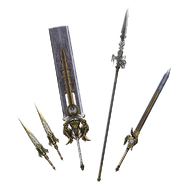 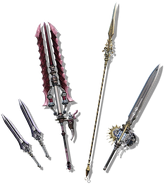 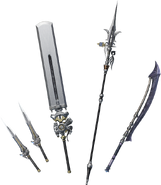 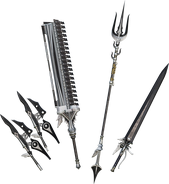 Noctis's Armaments V
Add a photo to this gallery 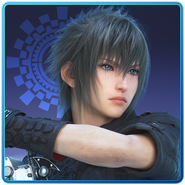 Armiger.
Add a photo to this gallery