Cast aside the doubt in your mind, pick up this staff, and watch the light of clarity shine down upon your path.

Nirvana (ニルヴァナ or ニルヴァーナ, Niruvana?), also known as Shambhala, is a recurring weapon in the Final Fantasy series. It is usually the most powerful staff and is mostly used by Summoners or White Mages.

Staff with the power of reflection.

Nirvana is a staff exclusive to the Advance and Complete Collection versions, and can only be equipped by Porom. It provides +80 Attack, 40 Accuracy, +15 to Stamina and Spirit, and casts Reflect when used as an item. It is found in the Lunar Ruins in the room full of dolls and puppets, is obtained in a chest by destroying all enemies in the room.

Nirvana is a dummied out weapon that can only be accessed via hacking, and would have provided 80 Attack, +15 Stamina, +15 Spirit, +40% Accuracy, +8 Defense, +2% Magic Evasion, and casts Reflect when used as an item. It would have been equipped by Cecil, Ceodore, Rosa, Porom, Leonora, Harley, and Golbez.

The Nirvana is Yuna's Celestial Weapon, and can be obtained at the Monster Arena in the Calm Lands. It requires the Moon Crest and Sigil to attain its maximum power. At maximum power, its abilities are Break Damage Limit, Triple Overdrive, Double AP, and One MP Cost. It allows the aeon Valefor to break the 9,999 damage limit once activated with the Moon Crest. Like all Celestial Weapons, Nirvana ignores target's Defense. It deals more damage the closer Yuna is to her max MP.

Yuna wields the Nirvana when she is in her Black Mage dressphere.

The Nirvana is the Summoner's Mythic Weapon. The final version reduces Avatar perpetuation cost by eight (exceeding all other options), increases the base level of avatars by two, increases Blood Pact damage by 40%, and features the unique Garland of Bliss weapon skill. Because of these factors, Nirvana is considered one of the few actually sensible Mythic Weapon upgrades.

The Nirvana is one of Penelo's strongest staves crafted in the Sky Saloon with a Rare Gemstone, Red Gemstone, and Luxuriant Hide. It provides a base of +40 Attack, +90 Magick, and +12 Speed. It uses a generic staff sprite during battle.

This upgraded weapon maintains the properties of the original, while boosting overall power and ATB capacity.

The Nirvana is a final tier rod weapon for Vanille, upgraded from a maxed second tier weapon using a Trapezohedron. While their passive and synthesized abilities vary, all Nirvanas add a ATB gauge segment.

Nirvana is the Zodiac Weapon for

White Mages. Nirvana is acquired via the quest

His Dark Materia, by combining reagents acquired from assorted other side quests with a materia created from Thyrus Nexus, the final stage of the white mage's Relic Weapon. Nirvana can then be upgraded to Nirvana Zeta, the most powerful white mage weapon in A Realm Reborn.

Nirvana's secondary stats are determined by what the player chose to imbue in their Thyrus Novus, and can be redone by acquiring and imbuing a new Sphere Scroll: Thyrus from Hubairtin in Central Thanalan and presenting it to Jalzahn Daemir in the North Shroud.

A staff that can only be mastered by the enlightened.

The Nirvana is the second strongest staff in the War of the Lions remake, providing 5 Attack, 15% Weapon Defense, 3 Magic, and being Holy elemental. It can only be obtained via Melee.

Staff held by those who have cast off base desire.

The Nirvana Staff is a powerful staff that can teach Full-Life to White Mages, Holy to Bishops, and Phoenix to Summoners.

It provides +34 Attack, +10 Resistance, and is Holy-elemental. It is obtained as a random reward for completing a mission or as a reward for a "Cave-Cave-Jagd-Jagd" Treasure Hunt or stolen from the summoner in the fight against Ritz.

The Nirvana is the ultimate staff. It adds 34 to Attack and 10 to Resistance, as well as being Holy-elemental. Nirvana teaches Arise to White Mages, Holy to Bishops, and Phoenix to Summoners.

It can be bought for 8,800 gil in the shop after creating it in the Bazaar after using a Lightwing Crystal, Mahbeny, and Crusader Tonic, or as a reward for completing the mission "Bonga Bugle - Mistleaf" by beating all monsters during the second round.

Sice's Shambhala scythe (Nirvana in the Japanese version) provides 63 Attack Power and is bought for 60,000 gil from the Akademeia Armory (complete The Clash in the Caverns on Finis difficulty). In the PSP version, it could also be acquired by exchanging for 10 tickets on the Square Enix Members site.

The Nirvana is the strongest staff and increases EX Mode duration by 40%. It can be obtained by trading 31,920 gil, Staff of Light, and Iifa Tree x5.

The staff of a legendary summoner, said to have brought about everlasting peace.

Nirvana grants +10 to Attack. It can be equipped by White Mage, Devout, Sage, Rydia, Krile, Eiko, and Yuna.

A staff from the faraway world of Spira. There are seven special weapons in Spira that exhibit tremendous power after strengthening them through special means, and the Nirvana is said to be one such weapon. This staff is said to have been used by a certain traveling summoner who ventured out into the world to defeat the great fiend, Sin.

Nirvana is a Staff that is obtained as Yuna's Trust Master. It provides 19 ATK, 68 MAG, 116 SPR, and boosts the Limit Burst gauge by 1 every turn.

Nirvana is a staff that can be equipped by Yui.

A staff crafted by one of the empire's preeminent weaponsmiths at the request of Nikolai Nikolanikov.
Though a pious man who abhors violence, Nikolai is committed to atoning for his sins, and thus carried this menacing staff as a symbol of the unwavering strength of his resolve. 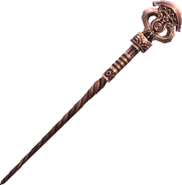 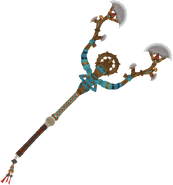 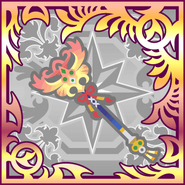 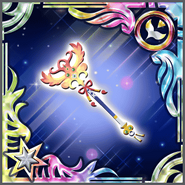 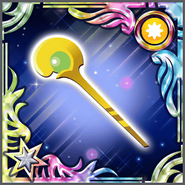 [view · edit · purge]Nirvana is an ancient Sanskrit term used in Indian religions to describe the profound peace of mind that is acquired with moksha (liberation). In shramanic thought, it is the state of being free from suffering. In Hindu philosophy, it is union with the Brahman (Supreme Being). Nirvana is the final goal of Buddhism refers to the imperturbable stillness of mind after the fires of desire, aversion, and delusion have been finally extinguished. Those who reached Nirvana state will be liberated from the cycle of birth, life, and death so they will never reborn again.

In Hindu and Tibetan Buddhist traditions, Shambhala is a mythical kingdom. It is mentioned in various ancient texts, including the Kalacakra Tantra and the ancient Zhangzhung texts of western Tibet.