Garnet Til Alexandros XVII: Mother, is that really the truth?
This article needs additional citations for verification.
Please help improve this article by adding links to reliable sources. The information in need of a reliable source includes:

Nintendo Co., Ltd. (任天堂株式会社, Nintendō Kabushiki gaisha?) was founded in September 23, 1889, as a producer of playing cards and other toys. By the late 20th century, it was transformed into a video game company, as it had developed a mastery of electronics assembly with its previous experience in toy-making. Today, it stands as one of the world's three largest producers of gaming hardware and software, the other two being Microsoft and Sony, and is often credited as the progenitor of the modern home console.

Successes from the start[]

Nintendo first found a foothold in the industry by making a series of electronic "microgames" such as the Game & Watch line of the early 1980s. Also around this time, the industry itself was in tumult as large numbers of companies flooded the video gaming market with hardware and software that was assumed to be popular, but was soon found to be of poor quality. These factors resulted in the massive video game crash of 1983 that crippled the North American market and other parts of the world. Even as Japan was largely immune, Nintendo had the foresight to strike at the crash's root causes. In response, it released the Nintendo Entertainment System beginning in 1983, arriving in the US by 1985. The console was a breakout hit in both regions, and was later released all over the world. For its part, Nintendo was thus instrumental to pulling the industry from the aftermath of the crash.

Nintendo soon became a household name, with memorable franchises and characters such as the Mario series, The Legend of Zelda hero Link, and Samus Aran from Metroid, the first-ever female lead in gaming history. The company was also key to bringing smaller developers into the mainstream, as it did with Square Co., Ltd. and its eventual rival Enix. It was in this climate that the first three games of the Final Fantasy series would not only develop, but flourish, at least in Japan. The original Final Fantasy did not reach the US until 1990. Its rival, Dragon Quest, was released one year sooner.

The golden age of RPGs[]

In the early 1990s, the Super Nintendo Entertainment System, was released, and on it, with several new Mario and Zelda games, were the new installments in the Final Fantasy series; Final Fantasy IV (II in the US), Final Fantasy V and Final Fantasy VI (III in the US), as well as the Squaresoft productions Chrono Trigger and the Nintendo/Square collaboration, Super Mario RPG: Legend of the Seven Stars, which all made Squaresoft one of the biggest names in RPGs at the time. Enix would follow suit with such titles as Dragon Quest V and Dragon Quest VI, plus the space-opera RPG Star Ocean and the Soul Blazer trilogy. As this so-called "Golden Age of RPGs" came to a close, Squaresoft left Nintendo for Sony, and did not reconcile with Nintendo until the release of Final Fantasy Crystal Chronicles. Enix, meanwhile, would stumble to the point of closing several main branches before the year 2000, releasing only a handful of games (including a portable reboot of the Dragon Quest Erdrick saga) before nearly fading to history.

Today, Nintendo continues in its chief roles as console maker, publisher, and first-party developer. Meanwhile, Squaresoft and Enix, now Square Enix after the two rivals merged in 2003, work together with Nintendo, and although no new installments in the main series have been released for Nintendo consoles, a host of re-releases, especially of the Super Nintendo Final Fantasy games, have been released on the Game Boy Advance, as well as the sequels to Crystal Chronicles.

After the success of the Super NES, and in part due to a "tick-tock" cycle that began with the Nintendo 64, Nintendo in the modern era has lost significant ground in home consoles. The causes of this decline are many, and include poor marketing strategy as well as a failure to read and anticipate changes within the overseas market that saw a rising preference in home consoles due to differences in societal infrastructure. The GameCube, for example, was a modest success, but was reported to have missed expectations due to lack of appeal overseas[citation needed]. The introduction of the Wii in 2006 would draw further mixed reaction[citation needed], yet the console sold 90 million units in its 8-year lifespan, 10 million more than Sony's PlayStation 3 had sold in nearly 11 years on the market. Behind the scenes, however, Nintendo was hawking its own ideas of what the gaming experience should be, including a focus on priorities of gaining the attention of "non-gamer" demographics. Thus, the Wii played host to a glut of poor quality games and "shovelware", raising questions as to the viability of motion control systems, seen largely as gimmicks[citation needed]. This, combined with a lack of third-party support, would lead Nintendo toward a standstill in core demographic reputation instead of expanding its base and collecting windfall profits[citation needed]. This would be further reinforced with the lukewarm reception of the Wii U in the 2010s, where its intended demographics refused to purchase a next-generation console merely on the perspective value of being catered to than actually playing video games[1]. Poor marketing of the Wii U even caused confusion as to whether the device was a new console or another peripheral for the Wii. On the other hand, with the overwhelming success of the Game Boy and its descendants, Nintendo maintains a near-complete monopoly in dedicated portable gaming thanks to its historic efforts and consistent reputation of development. With this, Nintendo seeks to recapture its former glory with the Switch, a device that functions as a console, tablet, and handheld in a single unit.

During Nintendo's 1980s rise, Square was notable for having created the racing game Rad Racer, as the library of games did not see many of said genre in its index. The game fared very well and was considered the premier racing game of the console; so much so the game was also featured as one of the three title games of the Nintendo World Championships.

Although Rad Racer held good reviews, Square faced potential bankruptcy. Hironobu Sakaguchi, the designer and supervisor of Rad Racer, would then come to create the then swan song, to surprise smash hit, Final Fantasy. Nintendo played the role of publisher, having helped distribute Final Fantasy to the United States and abroad.

Nintendo of America began publishing its own video game magazine, Nintendo Power, in 1988 as a successor to their quarterly Nintendo Fun Club newsletter. Though it began as a bi-monthly publication, it soon switched to a monthly format in May 1990 once a strong reader base had been established. Focusing entirely on games for Nintendo systems, the magazine often covered many of the first Final Fantasy titles for the NES and SNES, which could be considered the most far-reaching advertising for the series at the time.

Some Final Fantasy games even made it onto the magazine's cover. Because of Square's new deal with Sony in the mid '90s to create games exclusively for their consoles, there is a sizable gap between cover representations until the contract expired in the early 2000s.

The magazine's final issue was printed in December 2012[2].

In addition to magazine coverage, Nintendo Power would sometimes publish their own Strategy Guides (later called Player's Guides) for Final Fantasy titles, usually for games they themselves published in North America, beginning with the series' inaugural game in 1990. 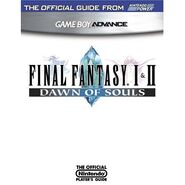