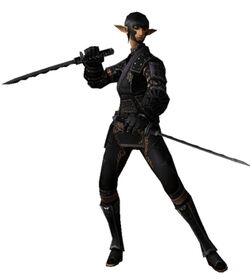 Strict training in the forbidden arts of the Far East have transformed these fighters into cold, hard killing machines.

Ninja appears in Final Fantasy XI as an advanced job available to players. Originally intended as a damage-dealing class, the Ninja job was cast into tanking by the players, due to their Utsusemi-blinking and the ability to provoke enemy attacks by using Warrior as a Support Job.

Ninja also get other spells that allow them to blind, paralyze, and slow the enemy, as well as elemental attack spells, and spells to make themselves Invisible or grant the effect of sneak. All of these spells use ninja tools rather than MP, allowing Ninja to cast without worrying about running out of MP. Ninja themselves have no MP at all, but they do benefit from support jobs that give them MP, like Black Mage because of the raise in Intelligence.

Ninja are the first job to gain the Dual Wield ability, with Dancers, Blue Mages, and Thieves also gaining the ability at later levels.

To become a Ninja, one must complete the quest "Ayame and Kaede" and have reached level 30. The quest features the story of Ensetsu's family and their connection to the pirates of Norg. Ensetsu wishes to reclaim an item he has sold to the Tenshodo, but they will not exchange it for anything other than a Strangely Shaped Coral from the Korroloka Tunnel. The player must go and retrieve it for him. 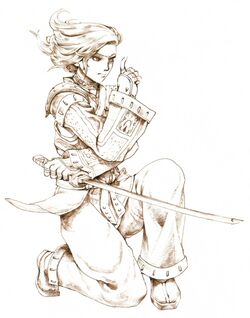 Though originally designed to be an enfeebling and direct damage job, Ninja has developed into one of the two major tanking jobs. Where a Paladin relies on damage reduction based on high Vitality and Defense, a Ninja's ability to tank relies almost entirely upon never getting hit. This form of tanking is often called Blink Tanking because it relies on Utsusemi, a Ninjutsu form of the spell Blink.

Warrior is used for most Ninjas in experience parties because of Provoke more than any other reason. This is the most simple form of enmity management and is the primary ability of any tank in keeping hate. At later levels, Warrior is a good support job for Double Attack, increasing the number of attacks the Ninja gets, as well as Berserk and Warcry which add to the attack rating.

Black Mage is often used as a support job for Ninjas who are fulfilling another role other than tank or high level damage dealing. Ninjutsu's strength is determined by Intelligence, so Black Mage is used as a support job as the job that generates the highest total intelligence for the Ninja. Ninjutsu elemental spells are capable of doing significant damage in this setup.

Dark Knight is used for tanking NMs such as Gods or Limbus kings. The ability to cast Stun and many other spells, including the job abilities Soul Eater and Last Resort makes it much easier for the Ninja to hold hate.

Dancer is used for an effective support job for Ninja who like to solo, for self-healing abilities like Drain Samba and Curing Waltz. When NIN/DNC takes hits after shadows fail, the Ninja can restore his/her own HP.

At level 80+, NIN/WHM becomes a very viable combination; it's usually the best combination for a solo Ninja along with Dancer at high levels. At level 80, setting White Mage as support job will grant the Ninja access to Haste (ability), which, combined with Haste equipment, will easily minimize the recast times of Utsusemi: Ichi and Utsusemi: Ni, and will make the Ninja's attack speed with Katana very fast (a speed nicknamed "Hundred Katana" by players, after Monk's special job ability, Hundred Fists). With Haste causing the Ninja to attack the enemy almost non-stop and minimizing Utsusemi's recast times, and spells like Dia II, Protect II, Shell II, Reraise, Stoneskin, Aquaveil, and White Mage's array of status healing spells, NIN/WHM has become a very potent combination for soloing, under one condition: that the Ninja has some sort of Refresh status, because NIN/WHM has abysmally low MP. NIN/WHM is at its best in Abyssea, while under the effects of at least one Atma granting Refresh status.

In groups, NIN/WHM has very little enmity, allowing for great use of Innin, but the Ninja will be rather powerless to protect its allies from enemy attacks.

Promotional artwork of the Ninja by Yuzuki Ikeda.

Artwork of a Mithra Ninja.

A Mithra Ninja in Artifact Armor.