Stealthy fighters who excel at surprising enemies and can wield two weapons at once.

The Ninja is a job in Final Fantasy V obtained after the Fire Crystal shatters. The Ninja is a potent job, as they can wield two weapons at once giving them two separate chances to inflict damage with regular attacks. Ninjas boast decent Strength and high Agility, but suffer in terms of Magic Power.

Ninjas cannot boost the damage output of elemental attacks outside of the Wind element through Air Knife, and therefore have no way to boost the damage of elemental scrolls used through the Throw command, unless they sacrifice their second slot for Equip Rods. Equipping a magic skillset can help alleviate Ninjas' low Magic Power.

The Ranger ability Rapid Fire allows a Ninja to attack eight times each turn thanks to Dual Wield, making it a good candidate for the secondary ability.

Mastering Ninja in all four characters in the mobile and Steam version earns the player the achievement "Ninja Legend".

Bartz and Galuf wear pants, Krile wears a skirt, while Faris and Lenna wear bodysuits. The ninja design is based on modern fiction, as this style was not invented until the 20th century.

Throw lets the player choose an item and the ninja will throw it at the target. Rarer items usually equal more damage. First Strike increases the chance of the party receiving a preemptive attack. Dual Wield is the classic ninja ability, letting the ninja hold a weapon in each hand, meaning they attack twice.

Dual-Wield is part of the well-known combo consisting of it, Rapid Fire and Spellblade.

Upon mastery, Freelancers and Mimes gain the Ninja's base Strength, Agility and Stamina unless they already have a higher base from another mastered job. They also gain First Strike and Dual-Wield as innate support abilities.

The Ninja appears as a character card. 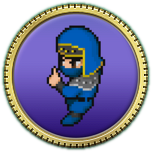