Ninja excel at using dark blades. They have the ability to throw weapons, which deal enormous amounts of damage.

The bearer of this certificate has become a veritable inventory ballista and is deemed worthy if the title of Master Ninja.

The Ninja is a job class in Final Fantasy III gained in the hidden land of Eureka in the Famicom and Pixel Remaster versions, and from the Earth Crystal in the 3D versions. Ninjas can deal massive damage by throwing weapons and specialized projectiles at the enemy.

In the 3D versions, Ninja is weaker than in the original version to be equal to other jobs. Ninja is considered to be a powered-up version of the Thief. With its high agility, Ninja has many attacks at a slightly lower attack strength, dealing the same damage as a mid job level Knight when first converted.

Ninja lacks a special ability but it can equip almost every weapon. The Ninja can equip Shuriken as normal weapons, which is consumed after the next use of the Fight command. Shuriken is the disposable equivalent to the Onion Sword, therefore, a fully equipped Onion Knight is technically the strongest physical class.

Ninja can throw any weapon in the party's inventory; this is the only way to use Shurikens, which are no longer equippable. Upwards of 10,000 HP of damage can be inflicted this way, although the game will always display such damage as 9,999.

Throw damage and hit rate are determined by the following formulae:

In the NES version, Ninja could equip any item except for the Onion equipment. In the 3D versions, the Ninja has a more limited equipment list.

In Onion Knight's EX Mode, he utilizes the Ninja job class whenever he uses a physical attack. If his EX Burst is activated by a physical HP attack, the Onion Knight will use Shuriken and Back Attack, or just Back Attack if the player fails to select Shuriken. During the EX burst, a Final Fantasy III battle window will appear and the player must select Shuriken under throw section.

A Ghost Card bearing the Final Fantasy III Ninja Player Icon can be fought by the player. The ghost is a Level 100 Onion Knight, and has the Green Gem and Noah's Lute to be won via Battlegen. 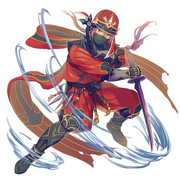 The Ninja job appears in the form of the Onion Ninja Signet.

Onion Ninja allows the wielder to use the following abilities: 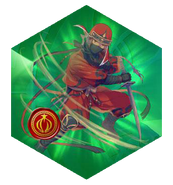 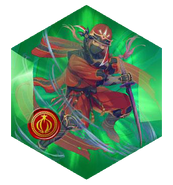 Ninja from the 3D remake appears on a Triple Triad card in Final Fantasy Portal App.

Arc as a Ninja.

Refia as a Ninja.