Relm: I couldn't miss the chance to practice my drawing!
This article is in need of a few pictures. Perhaps you can help by uploading a picture of Tiz as a Ninja. 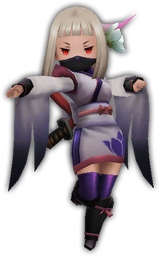 A dual wielder with high evasion through ninjutsu.

The Ninja (忍者, Ninja?) is an asterisk that appears in Bravely Second: End Layer. It is obtained after defeating Konoe Kikyo.

The Ninja focuses on high speed attacks with a high hit count, and evading enemy attacks. With their innate ability Dual Wield, they can deal high amounts of damage by using two weapons without penalty, while using Ninjutsu to to avoid or redirect enemy blows.

The Ninja's specialty is Dual Wield. Its job command is Ninjutsu.

Yew as a Ninja.

Edea as a Ninja
Add a photo to this gallery

This gallery is incomplete and requires Tiz as a Ninja added. You can help the Final Fantasy Wiki by uploading images.