A Primus l'Cie has gradually lost his humanity over his near-hundred-year life, leaving behind only absolute obedience to the White Tiger Crystal and nothing else. Now that Marshal Aulstyne has taken the Crystal hostage, however, Nimbus answers only to Cid. He hides his face and his emotions behind an intimidating mask, and many in the army find his extremely taciturn nature to be unsettling. In combat Nimbus generates a portal in midair and unleashes arrows of compressed light. He occasionally compresses this radiant energy to wield as a sword.

Nimbus is a non-playable character and boss in Final Fantasy Type-0 and Final Fantasy Awakening. He is a Primus l'Cie of the White Tiger Crystal, a taciturn and enigmatic man. He has fought many l'Cie in the past and lives to fulfill the purpose given to him by the Crystal. He is the most powerful l'Cie in the employ of the Militesi Empire, but as Marshal Cid Aulstyne has subjugated the White Tiger Crystal, Nimbus feels compelled to obey the marshal's every command.

Nimbus wears a helmet reminiscent of a tiger's head, and never removes it. A concept art shows him with dark skin and teal eyes

. He wears a red and white Militesi uniform with shoulder pauldrons that have capes attached and knee-high boots. The symbol of the empire is prominent on his attire and the energy projections he uses for battle also brandish it. On his concept art, his l'Cie brand is on his abdomen.

Nimbus's humanity is disappearing due to having been a l'Cie for a long time. Though he obeys the orders from Marshal Cid Aulstyne, he does it in a dispassionate and conflicted manner, aware he is being used as a tool.

The novel as well as its sequel, The Penultimate Truth, depict the spiral of Orience prior to the final cycle as depicted in the game.

Nimbus is the White Tiger Primus l'Cie, and when Milites was to enter an alliance with Lorica, he wreaked havoc at the treaty-signing, ruining the alliance and making the nations sworn enemies. Nimbus faces Class Zero at the battle of Togoreth Stronghold and swiftly kills Nine and Ace. As he is about to kill Queen the class's commanding officer, Kurasame Susaya, shields her and the two hold out for 57 seconds until Lord Zhuyu—the Vermilion Bird Primus l'Cie—arrives and Togoreth is obliterated amid the two l'Cie's battle. Both Vermilion Bird l'Cie perish defending Akademeia from the Militesi Ultima Bombs after Brigadier General Qator Bashtar succeeds Qun'mi Tru'e as the nation's Secundus l'Cie. Kurasame becomes the new and sole Vermilion Bird l'Cie and summons the Knights of the Round Verboten Eidolon on the Militesi army. Though Nimbus holds out for 19 minutes against the knights, he finally falls and enters crystal stasis.

Nimbus follows the Focus given to him by the White Tiger Crystal, but Marshal Cid Aulstyne holds the Crystal hostage, and thus Nimbus does the Marshal's bidding. After Class Zero defeats Qator Bashtar in the battle for Togoreth Stronghold, Qator falls back, leading to Nimbus being deployed as a final resort. Rubrumite forces are ordered to fall back as Lord Zhuyu is deployed to face Nimbus. Being the first l'Cie battle in over five centuries, the aftermath of Zhuyu and Nimbus's clash obliterates the stronghold and all but erases it from the map.

Nimbus confronts Class Zero when on their infiltration of a weapon manufacturing plant near the Militesi capital. He unexpectedly appears to strangle the party leader as a warning should they stand in his way. Following the defeat of empire's newest magitek armor, Brionac, Class Zero battles Nimbus who easily overpowers them even if he is not fighting with his full power. The announcement of a ceasefire interrupts the battle, signaling the arrival of representatives from Concordia and Rubrum. Nimbus retreats.

After the empire falls to Rubrum, Nimbus brings Cid Aulstyne to the site where Tempus Finis will begin. He is implied to have taken his own life and entered crystal stasis afterwards. Director Hajime Tabata has speculated that because the Crystals lost their power, Nimbus either took his own life, or eventually ran out of strength and died.[1] His broken helmet is shown in a snow-covered land next to a blooming flower, with a coerl resting next to it as life and peace returns to Orience.

Nimbus uses optic weapons, such as light rays. He fires torrents of light from the sky into the ground, and penetrates targets with condensed beams.

Nimbus is fought during the mission Operation MA Demolition. He is at Level 142, and is unbeatable. Should one whittle his health to 1%, it will stay there until he tires of the fight. Although the battle will end normally if all party members are KO'd, it is also possible to avoid Nimbus's attacks for three minutes to end the battle. This strategy is required to obtain an S rank for the mission.

Nimbus retains his abilities as a boss character as part of his skills, including his strongest skill. He attacks at long range with optic weapons. His strongest skill is to summon beams of light and hit his targets into the ground with a burst of flames. He grows in power when teaming up with Qun'mi Tru'e to use his shin version of his strongest skill.

In World Boss, a stronger Nimbus, Caetuna, Zhuyu and Gilgamesh fight the player. His skills are augmented as he can shoot beams of light to deal critical damage to his opponents and shoot multiple energy blasts from his optic weapons. His strongest skill can easily wipe out everyone.

In the Augite System, he has another form named Brom, and appears stronger than both Qun'mi and Qator. He can lock on to targets by shooting missiles with his dual cannons and his strongest skill is a powerful laser. Nimbus wipes out most of the characters, such as Kurasame, Kazusa, Cater, and others from Class Zero. Nimbus uses the three MA while combining with his power to transform into Brom and is witnessed by Zhuyu and Caetuna before they fight him.

The "Nimbus and Qun'mi Squads" are two particularly exemplary units of the Royal Guard in Final Fantasy XV: Episode Ardyn.

Nimbus was designed by Roberto Ferrari.

He is voiced by Kyle Hebert in English. He shares his English voice actor with Lahabrea from Final Fantasy XIV. 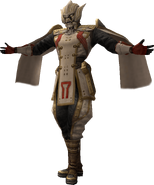 Nimbus in the Ingram crystal chamber.

Nimbus appears to the party.

Nimbus as a boss.

[view · edit · purge]Nimbus is Latin for "cloud". It is also a name for the cloud's type from which it rains. This could refer to his power, as he projects penetrating rays to decimate his opponents in the battlefield.